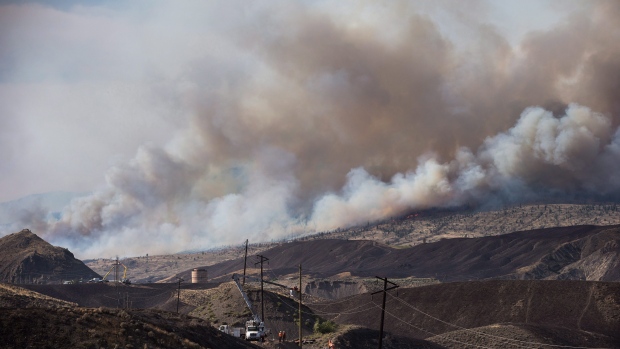 B.C. Hydro workers repair power lines damaged by wildfire as a fire burns on a mountain near Ashcroft, B.C., on Sunday, July 9, 2017 , The Canadian Press/Darryl Dyck

Enbridge Inc (ENB.TO) has taken a natural gas compressor station offline but it said on Wednesday that there had been no significant reduction in volumes shipped.

The fires have disrupted timber and mining operations, damaged a regional electric utility and forced more than 14,000 people from their homes in the interior of the province.

On Friday, British Columbia declared its first state of emergency since 2003.

Enbridge did not specify which pipeline system the station was on, saying only that it was in the affected area, a region ranging from 150 km (95 miles) to 350 km northeast of Vancouver where more than 200 fires were burning.

EnGold Mines Ltd (EGM.V) has suspended all exploration in the region and Imperial Metals Corp said it had significantly reduced operations at one of its mines.

Disruptions are expected to tighten the supply of wood products and raise prices.

Some of the fires were close to residential communities, and the Royal Canadian Mounted Police said that 10 people had been arrested for breaking into buildings in areas that had been evacuated.