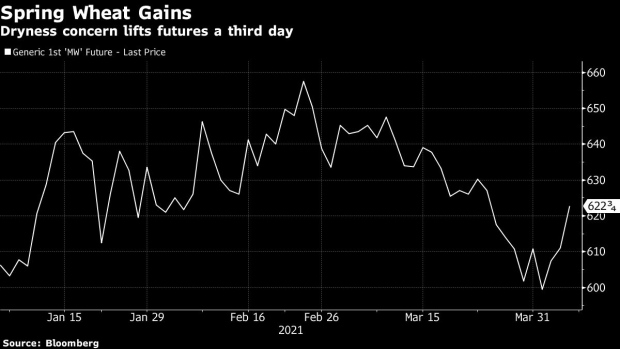 (Bloomberg) -- A boost in pizza prices in the U.S. may be on the horizon, if weather and planting estimates are any indication.

Spring wheat, the kind used in making much of the U.S.’s pizza dough, jumped to the highest price in almost three weeks as dryness grips key growing areas.

Two-thirds of the Northern Plains spring wheat belt is expected to be too dry for planted seeds to germinate over the next week, according to a Commodity Weather Group report. The dryness comes after American farmers already were planning to reduce acres of spring wheat.

“People are starting to get nervous about the dryness in the Northern U.S. Plains and Canada,” Adam Knosalla, broker at Frontier Futures in Minneapolis, said by phone. The drought-like conditions could result in lower yields at harvest.

Spring wheat is rich in the gluten that makes it desirable for products like croissants, bagels and pizza dough. If farmers plant fewer acres and the dry weather hurts supplies, that could translate into higher prices for the commodity. Inventories of the wheat are still ample, though, which could help fend off higher flour prices for now.

Futures for May delivery trading on the Minneapolis Grain Exchange advanced for a third straight day, climbing as much as 2.6% to $6.27 a bushel, the highest level since March 25. Benchmark soft red and hard winter varieties also rose in Chicago.

The U.S. Drought Monitor shows growing areas in the northern U.S. as “abnormally dry.” Drought is a top concern among many farmers going into the spring planting season. Much of the western U.S. is facing the driest spring in seven years, stoking worry that arid conditions could also plague the Midwest this summer.

In other crops, soybeans erased overnight gains as No. 1 grower Brazil is seen increasing plantings of the oilseed in the upcoming season, easing global supply worries.

Similarly, USDA is seen slightly raising its Brazilian soy production estimate on Friday when it issues its next monthly global supply-and-demand report. That could ease global inventory worries after the agency last week predicted smaller-than-expected U.S. plantings this spring, stoking supply concerns given robust demand for the oilseed led by China.

Corn closed 1.1% higher for a second straight day of gains amid questions about output in Brazil due to late plantings this season. Conab, the Brazilian national supply company, is due to update its crop estimates Thursday.