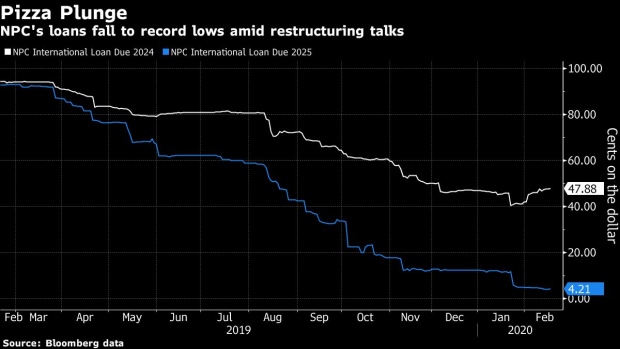 (Bloomberg) -- NPC International Inc. is exploring restructuring options including a bankruptcy filing as the company saddled with $1 billion of debt struggles amid relentless restaurant competition.

The largest franchisee of Pizza Hut restaurants in the U.S. started negotiating with its lenders after months of declining sales caused a cash crunch, according to people familiar with the situation who asked not to be identified discussing a private matter. The company aims to keep the restructuring out of court, but is weighing the possibility of a filing with a pre-negotiated plan in place, the people said.

The operator of about 1,600 restaurants, including Pizza Hut and Wendy’s brands, recently defaulted on about $800 million of debt after it chose to skip loan payments. NPC then entered into a forbearance agreement with lenders to allow time to consider debt restructuring options, said the people.

The discussions are ongoing, and NPC is still exploring options that could restructure the company’s balance sheet out of court and keep it from filing for bankruptcy, said the people. Should NPC opt for bankruptcy, the court filing would be used, in part, to help the retailer renegotiate leases with landlords.

Representatives for Eldridge, which acquired NPC alongside a co-investor in 2017, and Greenhill declined to comment. NPC, Weil Gotshal & Manges and AlixPartners didn’t immediately reply to requests for comment.

Executives of Yum! Brands Inc., the company that owns the Pizza Hut brand and licenses it to franchisees such as NPC, have acknowledged the financial issues faced by the chain and some of its operators in recent earnings calls.

“While we don’t comment on rumors and speculation or on specific situations with individual franchisees, Pizza Hut U.S. is in constant partnership with our franchisees across the country, including those facing challenges, to make sure we have the healthiest franchise system possible to grow and strengthen the brand,“ spokeswoman Virginia Ferguson said in a statement to Bloomberg.

Yum Chief Executive Officer David Gibbs earlier this month said that the company is working internally with Pizza Hut franchisees to help the brand get on a “firmer footing to grow.” Gibbs said Yum is committed to remaining a primarily franchised company with disciplined spending.

Like many competitors, Yum is nearly all franchised. That shifts most risks related to labor, food costs and remodeling expenses to restaurant operators instead of the company directly.

Closely held NPC chose not to make Jan. 31 interest payments on both its first and second-lien loans, the people familiar with the matter said. It signed forbearance agreements with creditors that suspend interest payments on its first-lien debt and allow more time for negotiations to take place, they said.

Earlier in the year, NPC received a new $35 million loan to inject cash in the business and improve liquidity. The terms of the super-priority loan, which was provided by existing lenders, prevent the company from making payments on the second-lien term loan, the people said.

NPC and Pizza Hut have struggled with rising labor and food costs while the are also trying to expand delivery and move away from traditional dine-in restaurants by opening locations that cater to pickup customers. It also faces cut-throat competition from rivals such as Domino’s Pizza Inc. and Papa John’s International Inc.

After battling declining sales in its Pizza Hut division, NPC told lenders earlier this year that it would suspend payments on most outstanding debt to preserve cash. The company operates more than 1,225 Pizza Hut and more than 385 Wendy’s stores across the U.S., according to its website.

Same-store sales at NPC’s Pizza Hut locations declined 2.5% in the most recent quarter, said the people, while NPC’s earnings before interest, taxes, depreciation and amortization slid to $16.2 million, a 16% decline from the same period a year earlier.

In the third-quarter results, which were released to lenders in early November, NPC reported a debt-to-earnings ratio of 7.66 times for the period ended on Sept. 24, the people said. That ratio put the company in breach of a covenant on the revolver that required leverage to be remain below 7 times, they said. NPC’s owners including Eldridge, which is run by former Guggenheim Partners president Todd Boehly, had injected cash into the company to keep it in compliance with the covenant.

Lenders brought in advisors of their own to assist in negotiations with the company, according to the people. A group of first-lien lenders are working with law firm Gibson Dunn & Crutcher LLP and investment bank Houlihan Lokey Inc. Second-lien lenders are getting advice from lawyers at Milbank LLP and investment bank Ducera Partners LLC.Representatives from Houlihan Lokey and Gibson Dunn & Crutcher declined to comment. Milbank and Ducera didn’t immediately provide comment.

To contact the editors responsible for this story: Rick Green at rgreen18@bloomberg.net, Jonathan Roeder