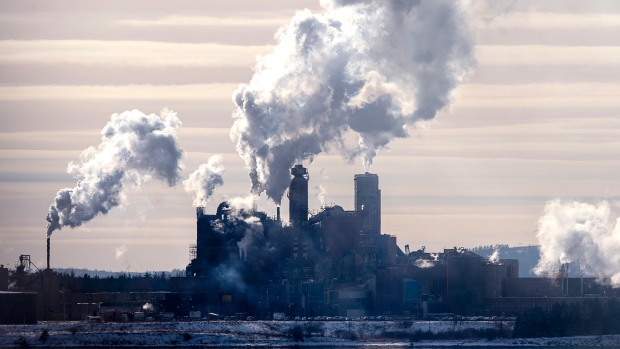 HALIFAX -- The owners of an idled pulp mill in northern Nova Scotia say their plans for a new effluent treatment facility have been withdrawn from the province's environmental assessment process.

Northern Pulp issued a statement Wednesday saying the company is instead drafting a new plan that calls for an overhaul of the mill near Pictou, N.S., and a more advanced treatment facility.

Pictou Mayor Jim Ryan said he wasn't surprised to hear a new proposal was forthcoming. Ryan said he's heard the company is planning to use a body of water somewhere in Pictou County to deal with the effluent, in addition to some form of secondary treatment.

"There will be concerns with that ... whether it's in the harbour or one of the rivers that enters the harbour," he said in an interview Wednesday.

"And we have big concerns about the air emissions, too. Hopefully, they're able to deal with that. I am not anti-mill. But clearly they need to do their work."

The plant, which once employed about 300 people, was shuttered in January 2020 after then premier Stephen McNeil decided Northern Pulp would no longer be allowed to dump effluent near the Pictou Landing First Nation. The union that represented workers at the mill, Unifor, calculated that 9,000 workers across the province would be affected by the closure.

The company had submitted two plans that would have seen the mill dump wastewater directly into the Northumberland Strait, but the province rejected both options in December 2019.

Despite the shutdown of the mill, owned by Paper Excellence Canada, new plans for effluent treatment were submitted for environmental review and the province announced in May 2020 it would spend up to $10 million to help the company clean up the site.

The province said the money would help pay for removal of leachate, decommissioning of effluent pipes and cleanup of ditches and aeration basins on the site. It said the work is expected to be completed by June 30, 2021.

The province owns the pipe that runs from the mill to the now-closed effluent lagoon.

In June 2020, the mill was granted protection from its creditors under the Companies' Creditors Arrangement Act, a move aimed at allowing the company to restructure. At the time, Paper Excellence said it wanted to preserve the value of its assets as it explored alternatives for restarting the mill.

Northern Pulp is developing a plan to "transform the mill" and address the concerns of local residents, special interest groups and First Nations, he said.

"We have taken the time to listen and review input received over the past few years to inform the development of environmental transformation and modernization plans for everything from community engagement to forestry practices to addressing odour, air, and water emissions," he said. The company plans to submit a new proposal to the provincial government before the end of the month.

The pulp mill had been operating since 1967. Its bleached softwood kraft pulp was used to make tissue, paper towels, fine writing paper and other products.

Earlier this year, the province confirmed it would spend $19 million to clean up the sludge in Boat Harbour, the location of the effluent lagoons. The cleanup near a Mi'kmaq community is expected to start in 2022, following the completion of a federal environmental assessment.

Before he was sworn in as Nova Scotia's premier in February, Iain Rankin once referred to the lagoons as one of the worst examples of environmental racism in Canada.

The province has already committed to a $292-million Boat Harbour remediation project. The plan is to return the waterway to its original state as a tidal estuary. Once cleaned up, Boat Harbour and the surrounding lands will be returned to the possession of Pictou Landing First Nation.