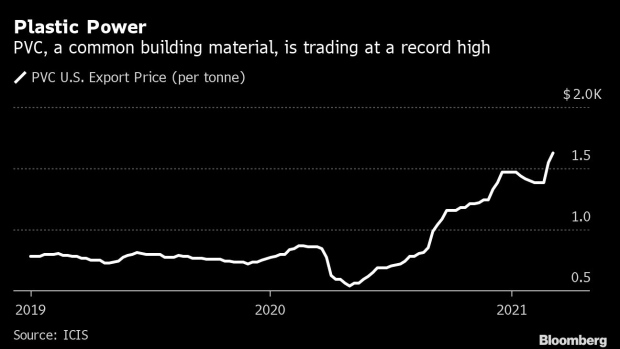 (Bloomberg) -- For anyone looking or examples of inflation these days, raw materials are a good place to start. Copper, steel -- even lumber -- are either near or at record highs. And so too are plastics, which often are overlooked but are on a tear right now.

Although they’re the building blocks of thousands of everyday products, plastics and their chemical ingredients don’t trade on major commodity exchanges, and large price moves are largely invisible to the wider world. Yet polyvinyl chloride, or PVC, is in the midst of a dramatic rally, driven by a combination of rebounding global consumer demand and production outages from last month’s Texas freeze.

More than 60% of U.S. PVC is still offline nearly a month after freezing weather hit Texas and Louisiana and decimated the power grid, according to ICIS, a data provider. PVC is a major construction material used for pipes, cable insulation, flooring and roofing, and the U.S. has become the world’s biggest exporter of the plastic in recent years.

“Today we don’t have enough volume to even meet the needs of the domestic customers” never mind exports, said Bob Patel, chief executive officer of chemicals giant LyondellBasell Industries NV. “I think we’ll be well into the fourth quarter before we see conditions back to normal,” he told the JPMorgan Industrials Conference Tuesday.

Even before the freeze, the industry was struggling to rebound from back-to-back hurricanes last year, meaning the supply shortfalls will have knock-on effects both domestically and around the world, not least in a housebuilding sector already under pressure from skyrocketing lumber prices. The supply constraints also come just as the U.S. government is unleashing a new round of stimulus and demand for consumer goods is surging.

Honda Motor Co. and Toyota Motor Corp. are reducing production of vehicles across North America due in part to the shortage of petrochemicals in their supply chains, the Japanese car giants said this week. Production lines and potentially entire plants are expected to be temporarily halted for several days in Kentucky, West Virginia and Mexico, Toyota spokeswoman Shiori Hashimoto said Wednesday.

Petrochemicals account for more than a third of the raw material costs in the average vehicle, according to ICIS. The car industry is also struggling due to a shortage of semiconductors.

Two of LyondellBasell’s ethane crackers in Texas are back up and running after the winter storm, but a third in Corpus Christi, Texas, will only start up in another three weeks, Patel said. Exxon Mobil Corp., Royal Dutch Shell Plc, Chevron Phillips Chemical Co., Westlake Chemical Corp., Dow Chemical Co. among others have also experienced severe disruptions at their Gulf Coast operations.

Patel estimates the freeze alone will reduce U.S. production of polyethylene, the most common plastic compound, by about 12% this year.

Polypropylene prices are at record levels and more than double the 2019-2020 average, according to ICIS, But that’s just the tip of the iceberg: PVC is also trading at record highs while high density polyethylene, used for shampoo bottles and grocery bags, is at the highest since 2008.

The Texas freeze is a “tipping point” after “an accumulation of a lot of bad production and supply scenarios over the past year,” said Jeremy Pafford, head of North America at ICIS. “That’s a cost somebody eventually is going to have to eat and that usually means the consumer.”

While not as pronounced and widely discussed surges in prices of softwood lumber and steel, the increase in plastics prices is starting to show up in the real economy. According to the Labor Department’s latest report on producer prices, the cost of plastic pipes was more than 16% higher in February than a year earlier. And the data doesn’t take into account the recent price spike.

The supply crunch is running headlong into strong demand for building materials and packaging over the past year. Consumers spending more time at home has led to a hot housing market in the U.S. as people seek more space while grocery and online shopping have increased markedly. These trends are likely to continue as the economy reopens, especially as President Biden’s $1.9 trillion relief bill works its way through the economy.

The bill “included infrastructure program, rental and mortgage assistance, which could support PVC demand in the construction sector in the near term,” Bloomberg Intelligence analyst Horace Chan wrote in a March 16 note.

Longer-term, petrochemicals are set to be the biggest source of oil demand growth due to economic expansion and increased use of plastic in consumer goods globally, according to the International Energy Agency’s Oil 2021 report. Liquefied petroleum gas and naphtha, used as chemical feedstock in Asia and Europe, will account for nearly 70% of higher demand through 2026, compare with 2019 levels, the report said.

In the U.S., where ethane is the primary feedstock, the Gulf Coast petrochemical industry had been booming until the recent operational setbacks due to cheap natural gas liquids from country’s shale fields including the Permian Basin.

It all contributes to reopening higher inflation expectations, particularly in housing, as the U.S. moves toward reopening as the Covid-19 vaccination rate increases, according to Stephen Stanley, chief economist at Amerherst Pierpont Securities LLC.

“It may be a sign of things to come in the sense that once the economy fully reopens we’re likely to see parts of the economy where demand is intense at least for a period of time, leading to some price pressures,” he said. Housing was the first place where it came about but now we’re seeing it more broadly.”