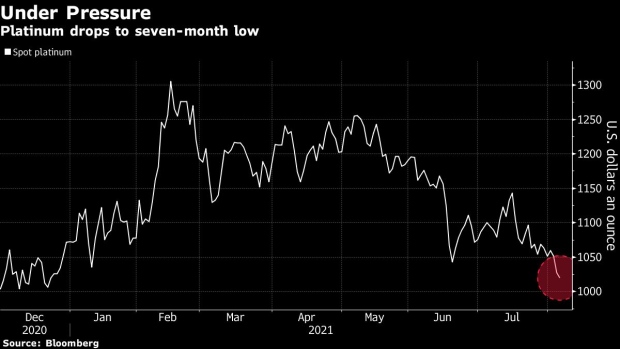 (Bloomberg) -- Platinum dropped to a seven-month low as the spread of the coronavirus dents the outlook for industrial commodities, while a Federal Reserve official indicated the central bank is on course to taper stimulus.

The metal used in catalytic converters fell for a third day as the spread of the delta strain punctures the narrative of a rapid global recovery. China is facing a growing outbreak that’s prompted analysts to review economic growth projections, while case numbers are climbing from Tokyo to Sydney and in parts of the U.S.

Platinum has tumbled more than 20% from this year’s peak in February as a computer-chip shortage curbed auto production, and increasing electric-car sales cloud the medium-to-long term consumption outlook. Investment demand also has waned, with exchange-traded funds backed by the metal platinum falling last week to the lowest since February, and money managers cutting their net-bullish bets to the lowest in almost nine months.

Platinum has come under pressure amid concerns about the delta variant and production misses by car manufacturers due to supply chain issues, said Wayne Gordon, a strategist at UBS Group AG. “The traditional headwinds for precious metals are weighing on some of these industrial precious metals, as well.”

Still, Gordon said he expects a recovery in catalytic-converter demand, and he forecasts more of the metal will be used instead of palladium.

“Platinum is moving into a tighter market environment because of a lack of investment on the supply side and the very strong recovery in autocatalyst demand,” he said.