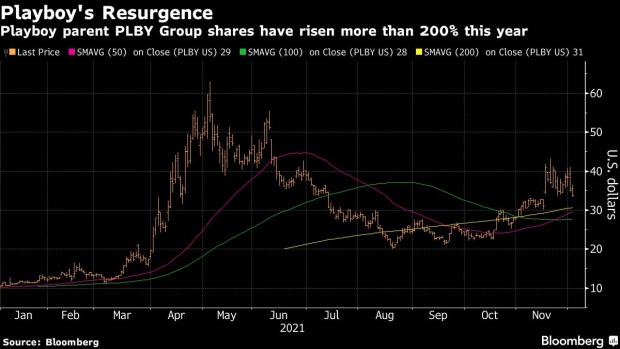 (Bloomberg) -- The owner of Playboy is bringing on Cardi B in the newly created role of creative director in residence, giving the brand a high-profile collaborator as it tries to reestablish itself in the pop culture landscape.

The music superstar will provide artistic direction in areas such as merchandise and digital editorial, PLBY Group Inc. said Thursday in a statement. Cardi B will also serve as the founding creative director and a founding member of Centerfold, a creator-driven website that’s set to launch this month.

The partnership underscores PLBY’s efforts to revive a brand that was once an influential name in men’s magazines and broader culture. With a goal to expand its direct-to-consumer business, PLBY’s deal with Cardi B will include co-branded fashion and sexual-wellness merchandise collections.

The shares reversed losses and climbed as much as 9.7% on the news. Through Wednesday’s close, the stock soared 233% this year. Wall Street sees more growth ahead: The company has six buy ratings from analysts, and no holds or sells. The average 12-month price target is $48, which represents 37% upside from its last closing price.

Besides its DTC initiatives, the company is broadening its digital offerings, including through Centerfold, an adult-entertainment platform in which users will create content and build communities of fans. PLBY also recently announced a collection of non-fungible tokens it’s calling Rabbitars.