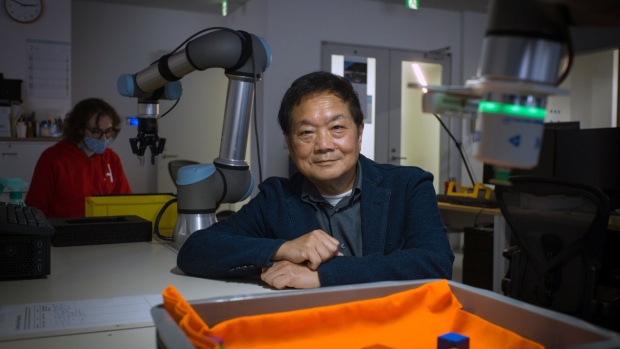 A robotic arm picks up a cube at Ascent Robotics Inc.'s office. , Bloomberg

(Bloomberg) -- PlayStation inventor Ken Kutaragi shrugged off the metaverse as the tech industry’s next big undertaking and head-mounted displays as the portal to that destination, describing them as dividing rather than unifying the real and virtual realms.

“Being in the real world is very important, but the metaverse is about making quasi-real in the virtual world, and I can’t see the point of doing it,” the 71-year-old entrepreneur told Bloomberg News in an interview. “You would rather be a polished avatar instead of your real self? That’s essentially no different from anonymous messageboard sites.”

The goal of Ascent, which Kutaragi describes as his life’s mission, is to blend the real world with cyberspace in a seamless, gadget-less fashion akin to Star Wars holograms. Tech companies including Apple Inc., Meta Platforms Inc. and Sony’s PlayStation unit are stepping up development of virtual-reality headsets amid a race for what they anticipate will be a metaverse bonanza. But Kutaragi is not a fan.

“Headsets would isolate you from the real world, and I can’t agree with that,” he said. “Headsets are simply annoying.”

The technology that Ascent is developing for its robotic systems will help transform real-world objects into computer-readable data. The idea is to create smarter, more versatile robots that’ll be able to perform various tasks and produce more than one kind of product. Ascent’s gear is aimed at retail and logistics customers, freeing up human labor from simple tasks.

The new funding will accelerate the development of a robotics platform that includes software, sensors and machines, all designed internally by Kutaragi’s team. Using off-the-shelf hardware wasn’t going to lead to a meaningful breakthrough, in the PlayStation pioneer’s judgment, so he’s reprising the approach he took in crafting the original Sony video game console from scratch.

“Current robots do not have software and sensors that can match humans in understanding the real world and reacting to things they see for the first time, and our short-term goal is to offer a solution to that,” he said. “Because you want robots to be able to create a variety of things, not just countless units of the same thing.”

Beyond industrial robots, Kutaragi wants to utilize the visual data gathered by Ascent’s robots and sensors to reproduce digital scenes in the real world. He envisions a revolution in e-commerce, which is still rooted in decades-old web technologies, as hologram representations of products provide a whole new shopping experience. Or the tech could be used to recreate a distant meeting place in the real world, allowing people to socialize remotely without having to resort to cumbersome headgear.

Ascent doesn’t presently make consumer products and is secretive about the details of its long-term plans. Kutaragi will start sharing more of his vision publicly this year and also look to form an open-collaboration group just as he did when making the PlayStation business, the CEO said.

“I don’t plan to spend a decade or two on making my dreams a reality. I’m 71 and time is short,” he said.