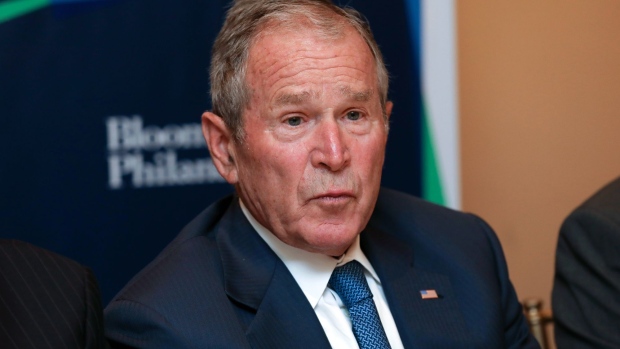 Former U.S. President George W. Bush pauses while speaking during the Bloomberg Global Business Forum in New York, U.S., on Wednesday, Sept. 25, 2019. The third annual Forum brings together important global leaders from the public and private sectors to address the threats from global warming to economic prosperity and examine the opportunities for solutions. , Bloomberg

(Bloomberg) -- A plot to assassinate former President George W. Bush in revenge for the Iraq War was foiled earlier this year, the Federal Bureau of Investigation said in an unsealed search warrant.

Shihab Ahmed Shihab, an Iraqi asylum seeker confided the plot to a paid FBI informant, according to a March 23 search warrant unsealed last month in federal court in Columbus, Ohio. The warrant, which was first reported on Tuesday by Forbes, has been resealed.

The plotters “wished to kill former president Bush because they felt that he was responsible for killing many Iraqis and breaking apart the entire country of Iraq,” FBI Special Agent John Ypsilantis, a member of Joint Terrorism Task Force in Cincinnati, said in the filing.

Shihab, a Columbus resident, asked the informant for details about security operations at Bush’s home in Dallas and Crawford, Texas, ranch. According to the filing, he also inquired whether four to six people would be enough to kill the former president and about how to obtain fake FBI or police badges.

The FBI said four Iraqi nationals were to be smuggled into the US from Turkey, Egypt and Denmark as part of the plot. Shihab told the informant that two of them were former Iraqi intelligence agents, according to the search warrant. The plan involved getting the plotters into Mexico and then crossing the border into Texas, Ypsilantis said.

Federal prosecutors in Cincinnati on Tuesday declined to comment because the matter isn’t yet public.

Bush last week reignited controversy over the war when he inadvertently transposed “Iraq” for “Ukraine” while criticizing Russian President Vladimir Putin for a launching a “wholly unjustified and brutal invasion.”