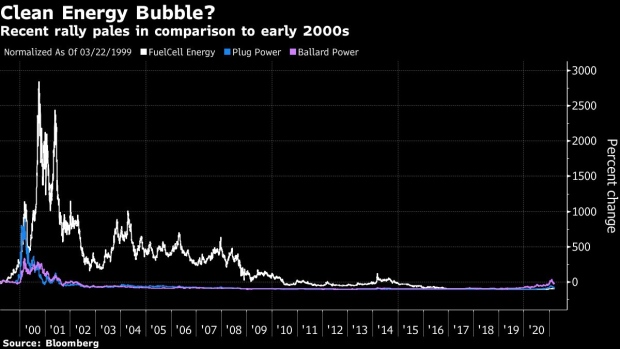 (Bloomberg) -- Clean-energy stocks have surged in the past year, raising alarm bells on Wall Street, which considers the gains too frothy -- but this latest rally ain’t nothing but a blip compared with the boom and bust experienced by the sector at the turn of the millennium.

Plug Power Inc. and FuelCell Energy Inc. are just two examples of companies that have soared in the past 12 months, having gained more than 10-fold since March 2020 in a reflection of growing investor enthusiasm for the fuel cells used in electric vehicles and power plants.

Valuations are extended, with FuelCell’s enterprise value-to-sales ratio sitting at 58 for the current fiscal year. That compares with 5.9 for Apple Inc. and 13 for Tesla Inc., according to data compiled by Bloomberg. They are fairly subdued however, when compared with the 113 EV-to-sales ratio FuelCell hit in 2000 or the 187 Ballard Power Systems Inc. reached the same year, amid an early version of today’s fuel-cell exuberance.

And herein lies the risk, according to some analysts. Investors who believe valuations can go way higher may be overlooking the fact that bubble ended badly, amid product delays and a series of bankruptcies.

Goehring & Rozencwajg cautioned that the industry could be in for the same fate two decades later. The firm is invested primarily in traditional energy and uranium, and said it would consider clean energy if the future looked more promising.

There have been recent signs of trouble in the industry, with Plug Power slumping last week after it revealed accounting errors and FuelCell falling on revenue that missed estimates.

“A decade ago, a series of failed promises and bankruptcies plagued the battery industry, making it nearly impossible for subsequent ventures to find financing and move forward,” they wrote. “We worry the same could occur on a much larger scale if tens of trillions of ‘green’ investments are eventually written off.”