The Latham, New York-based company, which soared more than 1,400 per cent in the past year through Tuesday, tumbled about 8 per cent. Despite the selloff, Plug Power is still up about 16 per cent in 2021 -- compared with an advance of almost 6 per cent for the S&P 500 Index. Its industry counterparts Ballard Power Systems Inc. and FuelCell Energy Inc. erased Wednesday’s losses and closed in the green.

Plug Power said it found accounting errors in results for 2018, 2019 and the first three quarters of 2020, but Chief Executive Officer Andy Marsh noted that the mistakes didn’t affect the underlying business. The disclosure was still a setback for the firm, which has struck a series of partnerships with companies such as Renault SA and South Korea’s SK Group. It also came at a time when growth stocks have been hit by the climb in bond yields. The WilderHill Clean Energy Index is up about 1 per cent this year, following a surge of more than 200 per cent in 2020. 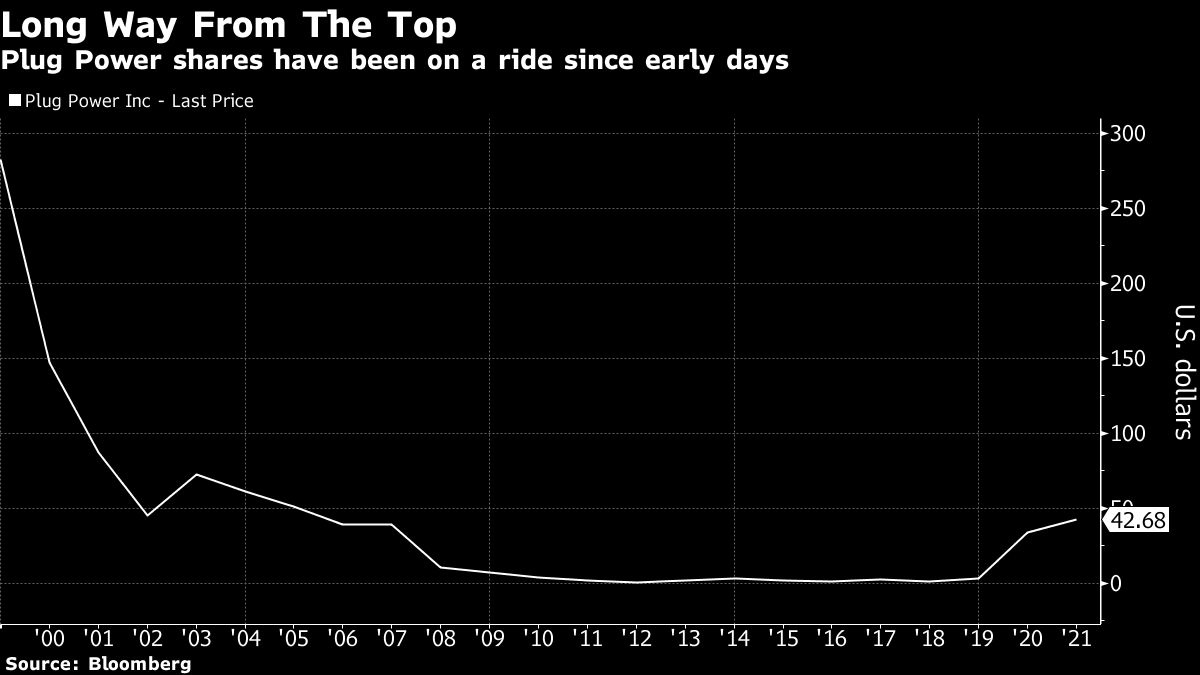 “Anytime a company needs to restate results, investors shoot first and ask questions later,” said Jeffrey Osborne, a New York-based analyst at Cowen, who maintained a buy-equivalent rating, with a price target of US$75 for the shares.

At the Roth Capital Partners annual conference Wednesday, Marsh said the company in 2018 adopted accounting methods for lease-back agreements after consulting with outside firms, and those methods passed muster with Plug Power’s auditors for the next two years. But its auditors have since decided the accounting needs to change, according to him.

“In these emerging industries, when you’re the first one to do anything, as Plug Power is, accounting can certainly be tricky, because there’s no model you can look at and say ‘I’m going to do it like the company down the street does it,’” Marsh said. He acknowledged Tuesday’s announcement was “surprising and disappointing for investors.”

Plug Power has successfully raised capital in the last year, though its forward revenue targets could face headwinds as competition looms, according to Peter McNally, global head for industrials, materials and energy at Third Bridge Group in New York. B. Riley’s Christopher Souther sees a buying opportunity for Plug Power, while Truist Securities downgraded Plug to a hold recommendation.

“Following these disclosures, we expect limited opportunity for outperformance in the near-term,” Truist Securities’ analysts said in a note to clients. “While the company reiterated long-term targets and the accounting issues appear transitory in nature, we see limited upside until resolution.”

It isn’t the first time a major fuel-cell stock has been rocked by accounting errors. Last March, Bloom Energy Corp. tumbled to US$3 per share from more than US$14 earlier in the year after restating its revenue downward for 2018 and 2019. The stock quickly recovered and soared to US$42.65 last month before pulling back.

Investors piled into alternative energy stocks leading into President Joe Biden’s victory, and are now facing concern over high-flying valuations. Hydrogen, which can be generated and used without producing greenhouse gases, has been touted as an alternative form of energy, while some participants remain unconvinced. Carlyle International Energy Partners recently called hydrogen power a “bubble.”