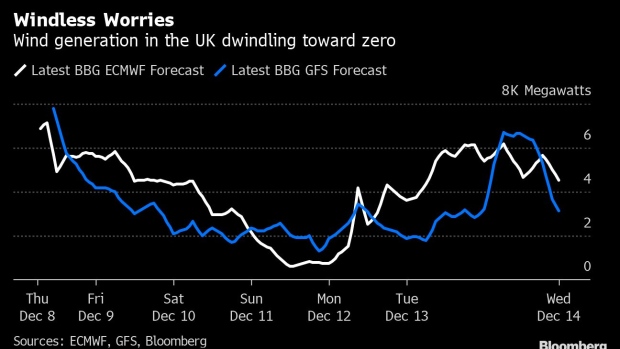 (Bloomberg) -- After this week’s cold snap in Europe, electricity traders on the continent and in the UK are bracing for what a slump in wind power over the next few days will do to prices.

Following an autumn that was milder than normal, a December freeze has sent prices soaring. Warnings of power shortages have become more likely and a dearth in supplies from UK, German and Nordic wind parks is set to test grids further.

“It will be worst on Sunday and Monday, with some extreme hourly prices, especially in the UK,” said Fabian Ronningen, an analyst at Rystad Energy AS.

UK power for Friday settled at £378.15 per megawatt-hour on Thursday morning in auction, the most expensive since the last day of August. Nordic and German prices are also the highest in months.

Grid operators have bolstered preparations ahead of what may be the most difficult winter anyone can remember. In France and the UK, some households are on standby to turn down consumption. Britain’s grid operator has paid almost £400 million ($487 million) for reserve coal supplies to be kept available. Authorities in Sweden and Finland flagged that outages may occur as demand peak.

Wind output will reach a low over the weekend and increase again on Monday. When the recovery actually starts, and the balance of interconnector flows, could make a big difference to the stability of supplies.

“Britain may have to engage in an expensive tug of war with mainland Europe to secure imports,” said Glenn Rickson, a power analyst at S&P Global Commodity Insights in London. “It’s the low wind outlook that is the real source of tightness.”

Wind output is expected to drop below 500 megawatts in the UK on Sunday morning, according to Bloomberg’s weather model. That’s just about 2% of the country’s installed capacity.

France, which uses power to heat homes much more than the rest of Europe, ramped up output at its nuclear, gas and coal-fired plants to avoid compulsory demand reductions, said S&P’s Sabrina Kernbichler. Low industrial use because of the high prices is expected to continue, but a drop in imports could force the grid to trigger a so-called Ecowatt alert to encourage savings, even if just for a few hours, she said.

--With assistance from Josefine Fokuhl.