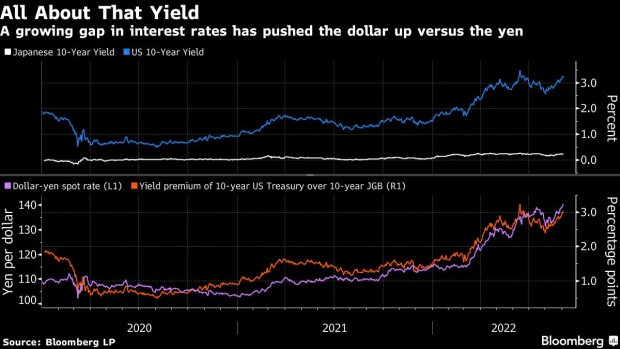 Shunichi Suzuki, a member of the Liberal Democratic Party (LDP) and the House of Representatives, speaks during a news conference at the party's headquarters in Tokyo, Japan, on Tuesday, Sept. 1, 2020. Japan’s ruling LDP adopted a structure for a vote to replace outgoing Prime Minister Shinzo Abe that could help the premier’s right-hand man, Yoshihide Suga, take over. , Bloomberg

(Bloomberg) -- The Japanese yen pulled back from a 24-year low against the US dollar as the nation’s finance minister indicated the government is closely monitoring foreign-exchange markets.

The currency reversed its early-Friday declines after Finance Minister Shunichi Suzuki said sudden moves in the yen are not desirable, signaling a potential effort to sway markets by raising the specter of a government intervention.

The yen moved to little changed on the day at around 140.17, after earlier weakening to 140.80, a level not seen since 1998. The move also tracked a broader weakening of the dollar as Treasury yields retreated following the release of the monthly US jobs report.

The comments from Suzuki come as the yen has significantly weakened this week, prompting speculation the Japanese government may wade into markets to prop up the currency, something it hasn’t done since 1998. The yen has plummeted nearly 18% this year against the dollar and is the worst performer among Group-of-10 peers.

Foreign-exchange strategists are skeptical, however, that Suzuki’s comments indicate the Japanese government is moving closer to intervening. But it shows that markets are becoming increasingly sensitive to rhetoric from Tokyo now that dollar yen has moved past the key 140 level. The drop has been fueled by the Bank of Japan’s decision to buck the hawkish shift among the world’s central banks by keeping yields at rock-bottom levels.

“I don’t dismiss intervention at some point, but I do think there is a deep reluctance to do it,” said Derek Halpenny, head of European global markets research at MUFG Bank Ltd. Government officials “understand the inconsistency of intervening at this point,” especially after BOJ Governor Haruhiko Kuroda made clear at the Federal Reserve’s Jackson Hole symposium last week that he is committed to monetary easing.

Halpenny added it would take much more dramatic market moves, such as the yen quickly moving past the 1998 peak of 147.66 to the dollar, to make the Japanese government budge.

Japan intervened in 1998 to prop up the currency as much of Asia was buffeted by a financial crisis. But there’s no sense of crisis currently afoot, and officials may have a disincentive to do so since a weaker yen could help the economy by making Japan’s exports more competitive.

Simon Harvey, head of currency analysis for Monex Europe Ltd., said the markets speculated that Japan would intervene if the yen weakened past levels it has already breached, only to see no such action materialize.

“As long as the real yield differential continues to widen between the US and Japan, the longer the yen is going to be under pressure and the more often we will hear public statements from officials like we’ve seen today,” he said.