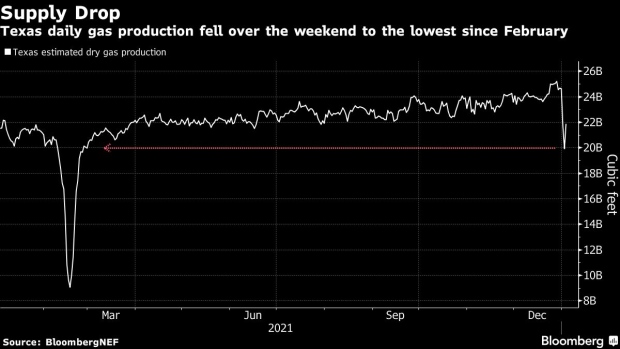 (Bloomberg) -- A plunge in natural gas supplies over the weekend underscores how vulnerable Texas’ energy system remains to extreme weather, almost a year after a winter storm plunged millions into dark for days.

Texas gas production on Sunday fell to the lowest since February’s historic freeze, according to BloombergNEF data based on pipeline flows. While volumes are seen rebounding to near-normal levels as the weather warms up, the drop is a stark reminder that the gas industry is still at risk of another weather-related energy crisis.

Back in February, when a deadly cold gripped the state, production more than halved for several days, contributing to widespread blackouts and hundreds of deaths. Despite calls for gas producers to harden their infrastructure against extreme weather, much of the industry has managed to avoid doing so. Weatherization standards adopted by state regulators in November don’t go into effect until 2023.