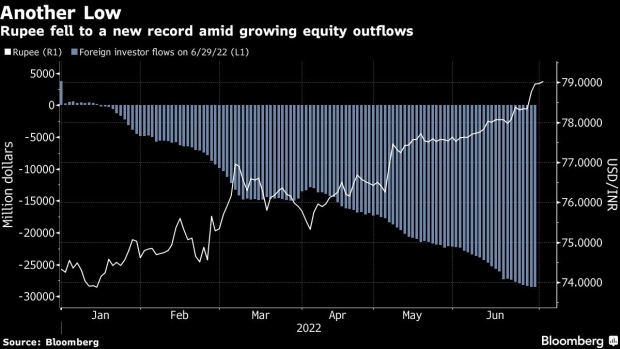 Motorcyclists wait to refuel at a Bharat Petroleum Corp. gas station in Bengaluru, India, on Thursday, March 4, 2021. India’s record pump prices of gasoline and diesel are the newest threat to the economy's nascent recovery, as high local taxes on retail fuel risk fanning inflation and driving a wedge between the objectives of fiscal and monetary policy makers. , Bloomberg

(Bloomberg) -- India tightened exports of oil and imports of gold in an all-out effort to rein in the rupee that plunged to a fresh record Friday.

The currency fell 0.2% to 79.1113 per dollar on Friday, after hitting multiple lows in recent weeks, while the benchmark index dropped 1%. The administration on Friday raised import taxes on gold, while increasing levies on export of gasoline and diesel.

Global investors have pulled an unprecedented $28 billion from the nation’s equities this year, and that along with higher oil import costs and a widening current account deficit have roiled the currency. A weaker rupee threatens to add to elevated inflation and may prompt the central bank to raise rates.

A shortfall in India’s current account -- the broadest measure of trade -- will probably widen to 2.9% of gross domestic product in the fiscal year ending March 31, according to a Bloomberg survey in late June, nearly double the level seen in the previous year.

The government on Friday raised the import duty on gold to 12.5% from 7.5%, according to a notice dated June 30, reversing a cut last year. The higher taxes on the export of gasoline and diesel sent shares of Reliance Industries Ltd. down by as much as 4.3%.

Reserve Bank of India Governor Shaktikanta Das has said the central bank uses a multi-pronged intervention approach to minimize actual outflows of dollars and won’t allow a runaway rupee depreciation. The RBI has close to $600 billion of foreign-exchange reserves, which it has been deploying to curb any sharp volatility in the currency.

(Updates with government measures in the second paragraph)