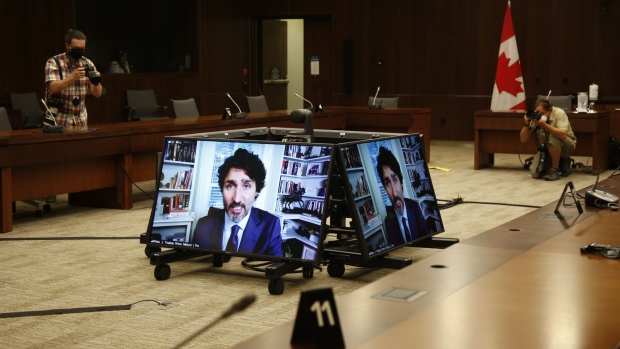 Justin Trudeau, Canada's prime minister, speaks by video conference before the House of Commons standing committee in Ottawa, Ontario, Canada, on Thursday, July 30, 2020. In his opening statement to the parliamentary committee studying the matter, Trudeau said he wasn't aware the public service had chosen WE Charity to administer the program until a briefing on May 8. Photographer: David Kawai/Bloomberg , Bloomberg

His agreement during a conference call with premiers Thursday came one day after Quebec's Francois Legault and Ontario's Doug Ford issued a joint call for a significant increase in the funding Ottawa sends them to help cover mushrooming health care costs.

The federal government has already committed to transferring $19 billion to the provinces to help them cope with the fallout from the COVID-19 pandemic, including some $10 billion for health-related expenses.

But Legault and Ford pointed out that money is a one-time transfer and argued that what the provinces need is sustainable, long-term funding to cover the ballooning costs of new technologies, drugs and an aging population, as well as ongoing pandemic-related costs.

They did not put a price tag on their demand but said a significant increase to the annual transfer is needed.

The federal government will transfer almost $42 billion to provinces and territories for health care in the current fiscal year under an arrangement that sees the transfer increase by at least three per cent each year.

Legault argued that the federal contribution covers only 21 per cent of the cost of delivering universal health care, well down from the 50 per cent share originally agreed to decades ago.

Trudeau has been holding conference calls almost every week with provincial and territorial leaders since the pandemic shut down the country in mid-March.

While those calls -- 18 of them as of Thursday -- have covered a range of issues, he has now agreed to devote one meeting entirely to the health transfers issue. His office says no date has been set for that call but it is likely to take place before Sept. 23, when Trudeau's government will issue a throne speech laying out its plan for economic recovery.

Trudeau is to join Ford today for IAMGOLD's ground-breaking ceremony for their Cote Gold Project in northern Ontario, about 130 kilometres southwest of Timmins.

During construction, the project, which involves international and local First Nations partners, is expected to create more than 1,000 jobs, as well as 450 full-time jobs once completed.

Trudeau is expected to tout the project as a sign that the economy, flattened by COVID-19, is starting to get back on its feet.