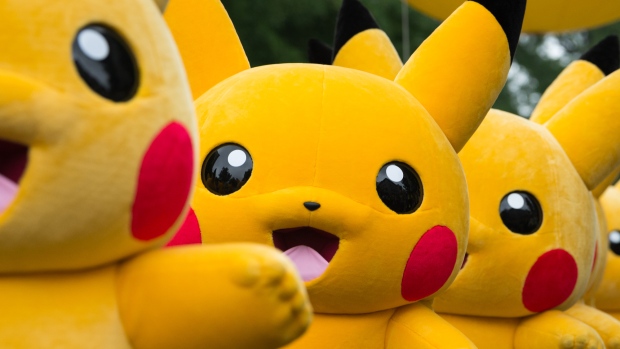 Performers dressed as the Pikachu character from Nintendo Co.'s Pokemon franchise march during the Pikachu Carnival Parade organised by Pokemon Co. in Yokohama, Japan, on Monday, Aug. 14, 2017. About 60 million people still play the Pokemon Go mobile game each month, according to data from mobile app research firm Apptopia, and one in five of those players opens the game on a daily basis. , Bloomberg

Tencent Holdings Ltd. and Pokemon Co. announced a jointly-developed new game for smartphones and Nintendo Co.’s Switch console, the Chinese tech giant’s latest move to foray into the console arena and expand its direct presence outside its home turf.

Pokemon Unite, created partly by Tencent’s Timi Studios, allows players to compete in five-versus-five battles, using the powers and attacks of Pokemon creatures. The software will be released for free with in-game purchases, but doesn’t have a release date yet. The Tencent subsidiary and Pokemon announced their partnership last year.

Pokemon Unite is a multiplayer online battle arena, or MOBA, similar in style and game play to the popular game League of Legends, from Riot Games, Inc., which is owned by Tencent.

“Pokemon has always had a competitive dynamic, so developing a MOBA is a natural fit” for the franchise, said Piers Harding-Rolls, an analyst at Ampere Analysis. It “clearly opens up potential for an e-sports dynamic focused on mobile.”

Tencent has high hopes for Pokemon Unite, as it believes the beloved Nintendo franchise will help the Chinese giant grow its presence outside Chinese PC and smartphone markets, where the games have a dominant presence. Tencent has been teaming up with Japanese game companies to distribute games and learn insights for developing good console game franchises.

Pokemon is the highest-grossing media franchise of all time, with earnings of more than US$90 billion thanks to games, movies and merchandise, according to a TitleMax report. Growing fears about a coronavirus second wave could spur expectations for rising demand for games as countries renew precautionary lockdown measures.