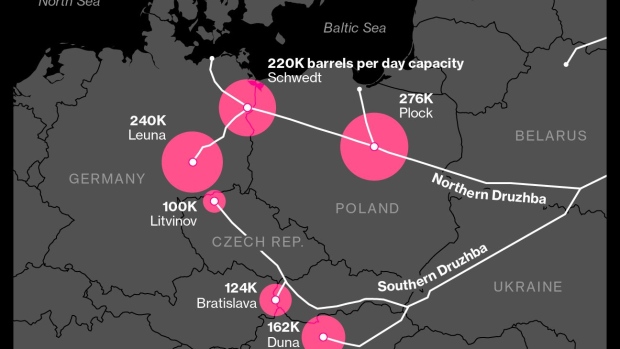 (Bloomberg) -- With just weeks to go until Poland is due to fully halt oil purchases from Russia, the government in Warsaw is lobbying for European Union measures to help it stick to the pledge.

Polish Prime Minister Mateusz Morawiecki promised back in May that his country would try to end oil imports via the northern leg of the giant Druzhba pipeline from Russia by year end. His German counterpart Olaf Scholz, whose country also relies on imports via the same oil link, made a similar vow at that time.

Back then, both were trying to strengthen the impact of EU sanctions that forbid purchases of seaborne oil from Dec. 5, while sparing pipeline imports. The plan was that following the Polish and German announcements, only countries using the southern leg of Druzhba -- Hungary, Slovakia and the Czech Republic -- would continue purchasing piped Russian crude.

Now Poland is pushing for both sanctions on the northern leg of the link -- creating a legal justification for Warsaw to terminate existing contracts with Russia -- as well as a system of tariffs for those who continue receiving via the southern part of the link.

“In our opinion the introduction of further sanctions, including on the northern leg of Druzhba pipeline, requires appropriate regulations on the EU level,” Poland’s climate ministry said in a response to questions from Bloomberg News. “Poland is cooperating with Germany on this matter.”

Its German counterpart ministry previously said it is “examining and discussing” implementation of its pledge to end pipeline imports “at high pressure.” It added that regulation on sanctions paves the way for the EU to lift an exemption on piped imports when a member state has made enough progress to diversify its supply sources.

Russia delivered about 720,000 barrels a day of crude to Europe via Druzhba last year, the lion’s share of that going to Poland and Germany.

Read: Russia and Europe Are Vital to Each Other When It Comes to Oil

At stake for the Poland is also the competitiveness of the nation’s top refiner, PKN Orlen, which is concerned that Hungarian rival MOL will glean a competitive advantage from accessing cheaper Russian crude, according to people familiar with the matter, who asked not to be identified.

Orlen has said it’s prepared for the potential halt as it’s able to replace the Druzhba imports with alternative supplies, but it needs decisions at government level if it’s to cancel otherwise valid contracts with Russian suppliers.

The company cut its domestic reliance on Russian oil to 30% following the invasion on Ukraine, replacing the crude with deliveries from other sources, mainly Saudi Arabia and Norway. Poland’s climate ministry said the country no longer imports seaborne crude from Moscow.

Failure to secure an EU-wide solution could give the Polish refiner a reason to continue Druzhba imports beyond the end of this year. Sanctions would count as force majeure, avoiding a breach of contract.

Last week, it emerged that the Orlen had asked about getting oil from Druzhba pipeline system next year  -- a move that company said was “only to book potential transit capacity.”

Polish officials believe there’s still a good chance that the country will halt all dealings with Moscow and that a political solution will be found.

While sanctions on the northern leg of Druzhba require unanimity and are set to be opposed by Hungary, a EU decision on tariffs would need a lower threshold of qualified majority support from national governments.

Other tools are also being considered, according to people with knowledge of the matter. The issue could be discussed among EU leaders at their summit in mid-December, where both Morawiecki and Scholz will be present.