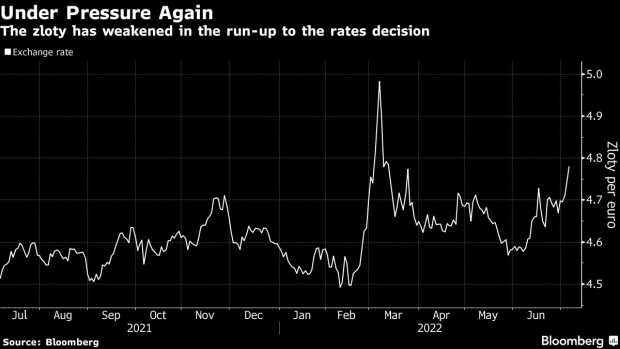 Poland’s central bank may raise interest rates for the 10th month in a row to quash inflation and support the zloty without triggering an economic slowdown.

Policy makers will lift the benchmark rate by 75 basis points to 6.75% on Thursday, according to most economists surveyed by Bloomberg. They are under pressure to deliver after peers in Hungary, Czech Republic and Romania all opted for bigger-than-expected hikes and the zloty slumped to a four-month low against the euro.

As inflation hits the highest in quarter of a century, the central bank needs to decide whether to dial down what Governor Adam Glapinski described as a drastic cycle of monetary tightening just as the economy slows.

Manufacturing has been contracting since May, dragged down by the instability brought on by Russia’s war in neighboring Ukraine.

The rapid pace of interest rate increases -- from near zero in October -- has dried up demand for home loans, sparked an outcry among mortgage borrowers and prompted the government to offer payment moratoriums.

Glapinski already signaled that policy makers are gradually approaching the end of the monetary-tightening cycle. Still, the central bank is more likely to slow the pace of increases while continuing to raise the main rate to 7.5% into the fall, according to economists at Citigroup Inc. in Warsaw.

Officials will unveil its new forecast on Thursday and Glapinski will brief reporters at 3 p.m. in Warsaw on Friday.