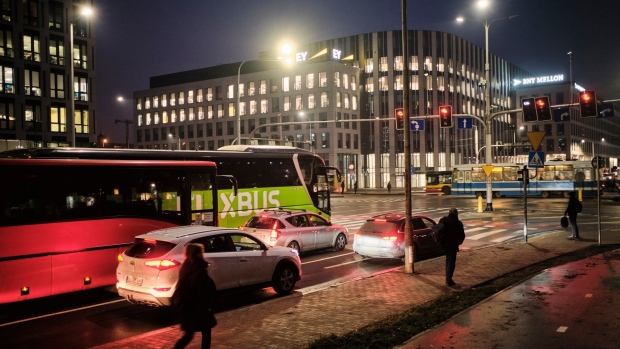 Traffic waits at a junction next to office buildings in Wroclaw, Poland, on Monday, Jan. 24, 2022. The Polish economy could face "a modern version of stagflation" in which rampant inflation is coupled with sluggish economic growth, warned Joanna Tyrowicz, the oppositions candidate to join the central banks policy-making board. Photographer: Bartek Sadowski/Bloomberg , Bloomberg

Negotiating teams from Poland and the European Commission on Wednesday reached an agreement on the so-called “milestones” of the plan, or the conditions under which the financing can be released, Piotr Muller told reporters.

“All that we have now is a formal approval” of the plan by the European Commission, which “should happen in the next few to about a dozen days,” he said in Bytow, northern Poland.

A deal would end a standoff between Brussels and Warsaw, bringing Poland closer to unlocking funds that the government says will also help deal with an influx of more than three million refugees from Ukraine. Approval has been snarled up for almost a year after the government refused to reverse some changes in the judiciary that the EU said dangerously increase political influence over the courts.

Even if final approval is granted, the decision doesn’t mean Poland will immediately be able to tap the financing, which is tied to the country meeting a number of targets. The ruling coalition is still at odds over a bill that would dismantle a contested mechanism for disciplining judges, a key sticking point in its dispute with Brussels.

An agreement could unlock talks on other issues in the EU, including on implementing a global tax deal.