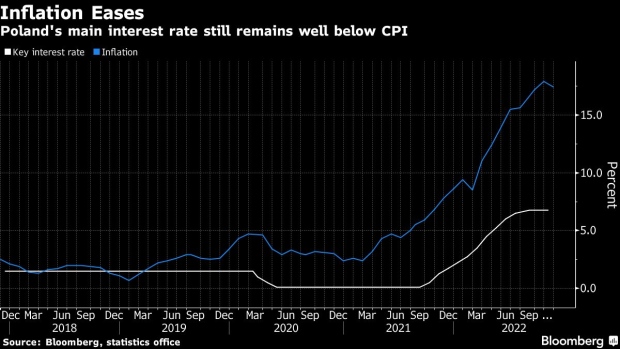 The decision to leave the benchmark at 6.75% was expected by all 30 economists surveyed by Bloomberg, reinforcing the sense that the cycle of increases that hoisted the borrowing costs to the highest level in a decade is over. Investors are predicting that the next move will be a rate cut late next year.

Inflation slowed for the first time in eight months in November, albeit at 17.4% remains close to the highest level in more than a quarter century. Governor Adam Glapinski has repeatedly flagged the risk of stifling the economy with excessive monetary tightening, worrying that it could spur unemployment.

Glapinski will hold a news conference at 3 p.m. in Warsaw on Thursday.

Polish rate-setters in October brought a halt to an aggressive monetary-tightening campaign, which increased interest rates from almost zero a year earlier. The hikes were a response to double-digit inflation, driven by energy and food prices after Russia’s invasion of Ukraine.

The central bank expects inflation to peak early next year after some tax cuts designed to keep fuel prices low expire. It’s forecast to return close to the central bank’s target in late 2025.

With a slowdown gripping the economy, forward-rate agreements signal more than 100 basis points of monetary easing over the next 12 months.

--With assistance from Barbara Sladkowska, Wojciech Moskwa and Piotr Bujnicki.