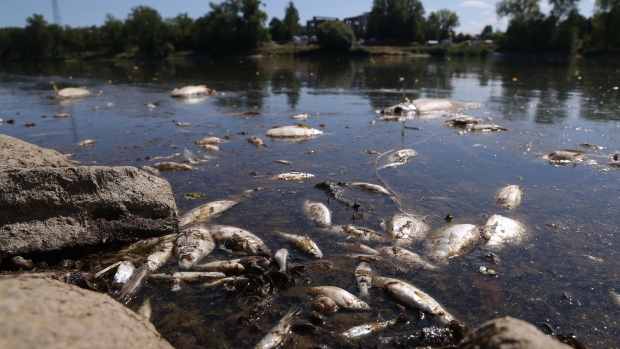 HOHENWUTZEN, GERMANY - AUGUST 12: Fish lie dead on the western bank of the Oder River on August 12, 2022 at Hohenwutzen, Germany. Tens of thousands of fish have turned up dead in recent days along the Oder River that forms the border between Germany and Poland. German authorities say they have detected high levels of mercury in the river and suspect a possible industrial accident up stream in Poland as the cause. Meanwhile people are urged not to bathe in nor to let animals drink from the Oder. (Photo by Sean Gallup/Getty Images) , Photographer: Sean Gallup/Getty Images Europe

(Bloomberg) -- Polish Prime Minister Mateusz Morawiecki confirmed that the release of an unidentified toxic substance has contaminated the Oder River, as the government offered a reward to find out who is responsible for polluting the country’s second-longest waterway.

Tons of dead fish have been hauled from different parts of the river on the border with Germany in the last two weeks, in what some environmental groups have described as Poland’s biggest disaster in years.

Morawiecki told reporters Saturday that he learned “too late” about the incident and dismissed two top civil servants in charge of environmental protection and water management. The government is offering 1 million zloty ($220,200) for information about those responsible.

“We want to find people who caused such an ecological crime of a huge scale as fast as possible and to punish them severely,” he said after meeting with a crisis-management team in the western city of Gorzow Wielkopolski.

Climate Minister Anna Moskwa earlier said no mercury was found during water tests, adding that German and Polish authorities have so far only confirmed a high level of salinity. More toxicological examinations are ongoing, as previous tests showed some traces of mesitylene.

German authorities said Friday that substances could have been introduced into the Oder for a long time, triggering “multi-causal relationships” with water levels at historic lows. Poland has deployed about 200 troops to help remove the contamination and dead fish.