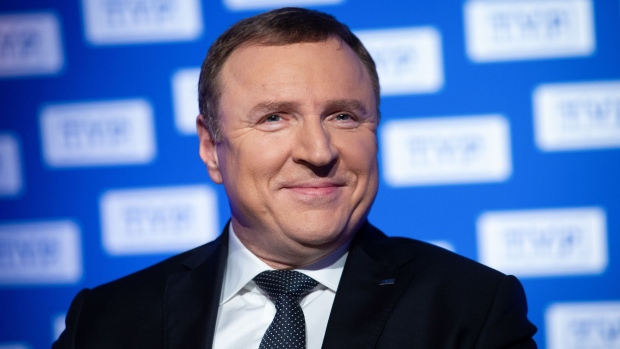 (Bloomberg) -- The political strategist who critics say helped transform Poland’s public television into a mouthpiece of the government has joined the World Bank as the country’s new representative.

Jacek Kurski, who ran public television for much of the past seven years until his dismissal in September, joins the international lender as an alternate executive director for a group of countries led by Poland and Switzerland, the Polish central bank said on Wednesday. His candidacy was submitted by Governor Adam Glapinski.

The self-described “bull terrier” of Jaroslaw Kaczynski, the powerful leader of the ruling Law & Justice party, Kurski has turned public television into an “instrument of propaganda” for the government, according to a report by Reporters Without Borders, an advocacy group for independent media.

Kurski, 56, has been an on-and-off member of Law & Justice since 2002 and helped the party first win power in 2005. He was credited with helping Lech Kaczynski — the late twin brother of the party chairman — win the presidency that year by suggesting that the grandfather of his main political opponent had “volunteered” to join the German army during World War II.

Once the allegations were proved false, Kurski was briefly expelled from Law & Justice.

He was reported to plan a return to politics after leaving public television to help the ruling party bolster its sagging support ahead of next year’s election.

The decision to join the World Bank means having to give up on some ambitions in the public life, Kurski said in a tweet on Wednesday. “I always thought there’s no life outside politics. It turns out there is.”

Kurski is an economist with a degree in international trade from the University of Gdansk, the central bank said. On Monday, he took part in his first meeting of the Swiss-Polish constituency, which also includes Azerbaijan, Kazakhstan, Kyrgyzstan, Serbia, Tajikistan, Turkmenistan and Uzbekistan.

The appointment of a country’s representative “is solely a matter for its government,” the World Bank said in a statement. “The bank doesn’t approve candidates; its role is limited to administering appointments.”

(Updates with comments from Kurski and the World Bank, from paragraph seven.)