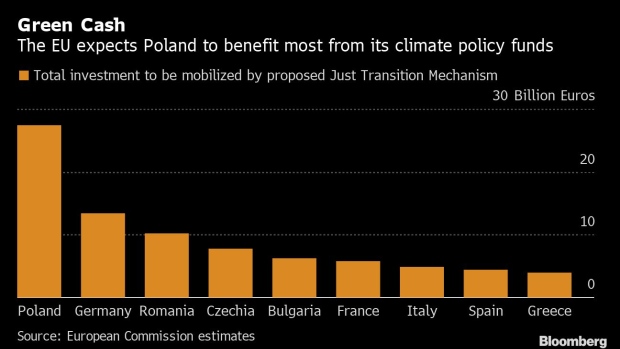 The European Union made Poland an offer it may find hard to refuse: some 27 billion euros ($30 billion) in investments to encourage Warsaw to jump on the bandwagon and commit to eliminate carbon emissions like all its EU peers.

The estimated bonanza is part of a 100 billion-euro “Just Transition Mechanism” proposed by the EU’s executive arm to help fund the move to climate neutrality. Poland, the eastern member state which relies on coal for more than 80% of its electricity production, is expected to attract more than a quarter of the total investment, according to an indicative estimate by the European Commission seen by Bloomberg News.

The mechanism is part of the European Green Deal, a far-reaching strategy that will affect everything from energy to agriculture and transport. The plan commits the EU to reach net-zero emissions by mid-century, effectively turning Europe into the world’s first climate-neutral continent.

Poland endorsed the EU-wide goal at the last meeting of the bloc’s heads of government in December, but declared it will eradicate its own emissions domestically only in the second half of the century because of the effort and expense required. The Just Transition Mechanism is designed to help alleviate these concerns, targeting the regions most affected by the green push.

The mechanism foresees financing from the EU’s common budget, co-financing from national governments as well as contributions from the European Investment Bank and the private sector to mobilize the total of 100 billion euros from 2021 to 2027.

Other big beneficiaries of the mechanism could be Germany with 13.4 billion euros, Romania with 10.1 billion euros and the Czech Republic with 7.8 billion euros, according to the document with the Commission’s estimates that was presented to member states.

“We invite member states to identify the regions that need the money and our practical support, and to work with the commission on a concrete plan for change,” Frans Timmermans, EU climate czar, told the European Parliament in Strasbourg on Tuesday, when he presented the mechanism.

To contact the editors responsible for this story: Reed Landberg at landberg@bloomberg.net, Nikos Chrysoloras, Wojciech Moskwa