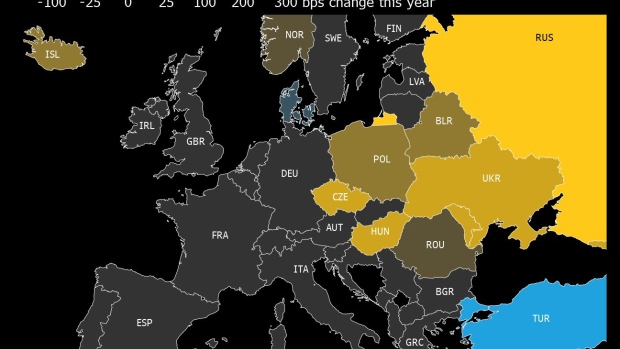 Poland raised its key interest rate to the highest level since before the pandemic, stepping up the fight to rein in the fastest inflation in two decades.

The Monetary Policy Council lifted the benchmark 50 basis points to 1.75% just days after Governor Adam Glapinski said he had changed his mind and no longer sees spiraling price growth as transitory. Most economist surveyed by Bloomberg predicted the move, which follows mounting criticism of the central bank for failing to act sooner.

The third hike in a row underscores a dramatic about-face by Glapinski. Despite surging price growth becoming a hot-button political issue in Poland, the governor resisted calls for most of this year to follow the nearby Czech Republic and Hungary in tightening monetary policy before unexpectedly lifting rates in October.

The government last week adopted a package of temporary measures designed to tame inflation and compensate poorer Poles for rising fuel and energy prices. It has also encouraged the central bank to continue raising rates as the leader of the main opposition party, Donald Tusk, slammed Glapinski for being to slow to tame inflation.

The ability to restrain prices may determine whether the governor is able to win the ruling party’s endorsement to stay on for a second, six-year term.

Glapinski, whose current tenure ends in June 2022, expects inflation to peak in December and said he won’t sacrifice Poland’s record-low unemployment by raising rates too aggressively. He’ll hold a news conference at 3 p.m. in Warsaw on Thursday.

Going into the meeting, the 10-person Monetary Policy Council remained split about the scale of monetary tightening they needed to deliver. Rafal Sura and Jerzy Zyzynski said bringing the benchmark back to 1.5% would suffice until the effects of the rate hikes and government measures filter through into the economy.

Other officials, including Eugeniusz Gatnar and Lukasz Hardt, said that bringing the key rate to around 2% may be needed to contain price growth and wage demands.

Another concern is the persistent pandemic and its potential to undercut economic growth, a main factor in the central bank’s reluctance to tighten policy this year. The government has re-imposed some social-distancing restrictions but has forgone a stricter lockdown like that embraced by fellow European Union member Austria.

But the EU’s largest eastern economy is expected to grow about 5% this year, which should provide room for further rate increases, Michal Dybula, chief economist at BNP Paribas in Warsaw, said before the decision.

“With such a pace of growth, Poland shouldn’t be afraid of any potential slowing in the aftermath of the fight with inflation,” Dybula said. “Poland shouldn’t get sidetracked from the path -- inflation has to stay in focus.”