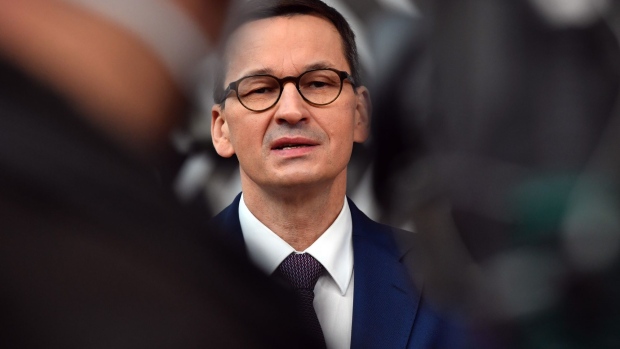 Mateusz Morawiecki, Poland's prime minister, speaks to journalists as he arrives at a European Union (EU) leaders summit in Brussels, Belgium, on Thursday, Dec. 10, 2020. EU leaders will likely approve today a landmark stimulus package, after Germany brokered a compromise with Hungary and Poland to lift their veto over the deal. , Bloomberg

(Bloomberg) -- Poland’s ruling party faced a threat to its majority after a political ally attacked the government’s dealmaking with the European Union and raised the prospect of exiting the coalition.

An ally of Justice Minister Zbigniew Ziobro, who has rejected any compromise with Brussels over Poland’s overhaul of its judiciary, accused Prime Minister Mateusz Morawiecki of overseeing a “transfer” of the nation’s sovereignty. The charge is a response to the ruling Law & Justice party’s latest attempt to break a deadlock with the EU, which accuses Warsaw of politicizing its judicial system.

“All of Poland has been deceived,” Deputy Climate Minister Jacek Ozdoba told wp.pl in an interview on Wednesday. Asked whether his faction would leave the ruling coalition, the minister said that “all options are on the table.”

The comments lay bare a simmering conflict between the nationalist Law & Justice and the junior partner, a group of 19 lawmakers around Ziobro who reject rolling back policy changes that the EU says give politicians too much sway over Poland’s courts.

At stake is a last-ditch effort by Morawiecki to convince the EU to release €34.5 billion ($35.8 billion) in post-pandemic aid. The volley from the rebel faction complicates those talks, as the ruling party looks to the unlocked financing to bolster its chances in next year’s general election.

Law & Justice’s coalition faces a test next month, when the opposition has called a confidence vote on Ziobro. A spokesman for the cabinet, Piotr Muller, said Wednesday that the ruling party wouldn’t allow the government to be destabilized, signaling it would support the justice minister.

Morawiecki has been on the receiving end of Ziobro’s political attacks for years. But the latest parrying has taken on urgency as polls show support for Law & Justice slipping, jeopardizing its hold on power ahead of an election slated for October 2023.

--With assistance from Natalia Ojewska.