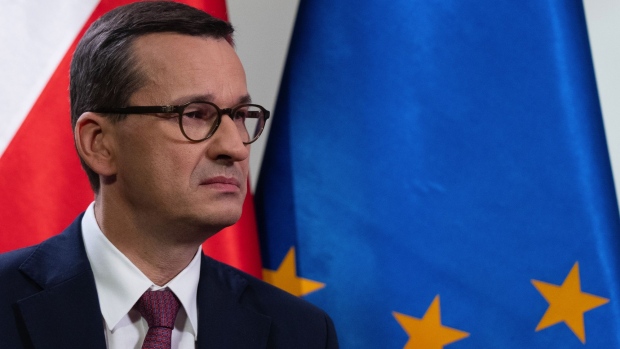 (Bloomberg) -- The Polish government’s plan to grant immunity to public officials who broke the law “acting in the public interest” to fight Covid-19 is running into trouble as a junior coalition partner opposes the draft law.

The move by loyalists of Justice Minister Zbigniew Ziobro highlights growing strains in the coalition before a cabinet revamp due this month or next.

The hard-liner, whose court reforms have undermined Poland’s reputation as a thriving democracy and triggered numerous European Union lawsuits for breeching the rule of law, is battling for supremacy in the government with Prime Minister Mateusz Morawiecki.

“It’s the duty of any public official to obey the law, not to take shortcuts,” lawmaker Janusz Kowalski said Tuesday, a day before the contested legislation will be debated by parliament.

The comments come the same day a Polish court ruled that Morawiecki “blatantly” broke the law by ordering the post office -- instead of the state electoral commission -- to play a leading role in a presidential ballot that was slated for May.

The vote was ultimately postponed by nearly two months due to Covid-19 risks and held under different methods after an outcry over potential fraud. Government spokesman Piotr Muller declined to comment on the verdict until the court publishes a justification for its ruling.

Opposition parties have also criticized the immunity legislation, saying it would effectively sweep under the carpet a number of instances of suspected graft. Poland’s health minister and his deputy both quit in August following newspaper reports about irregularities during virus procurement deals.