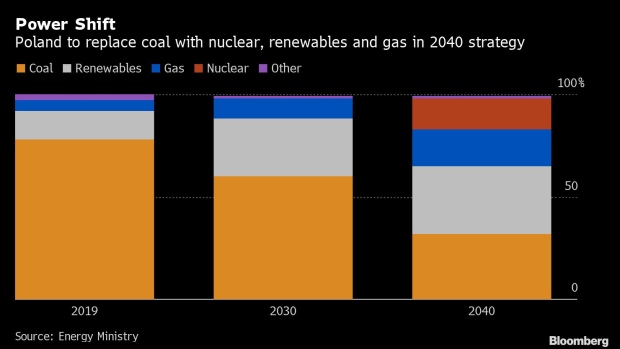 (Bloomberg) -- Poland’s last coal-fired power plant is set to get built much sooner than forecast. It’s just not the one that was expected.

The country, which generates most of its electricity from coal, is likely to drop its controversial $1.5 billion Ostroleka project due to stricter climate policies. That leaves the 910-megawatt Jaworzno plant, due to be finished later this year, to take the title of Poland’s last new coal station.

The decision on Thursday to suspend funding for Ostroleka comes as Poland negotiates with the European Union for a share of a 100 billion-euro ($111 billion) program to help finance the bloc’s move to climate neutrality. The 1,000-megawatt project scheduled for completion in 2023 was already an odd fit in the country’s expected push away from coal.

The EU’s largest eastern economy revived the Ostroleka project four years ago. Over the years, investment in the plant became less feasible for the state-controlled utilities building it, Enea SA and Energa SA, as pollution costs rose and banks became increasingly wary of fossil-fuel projects.

Enea and Energa have spent close to a quarter-billion dollars on Ostroleka amid pressure from the government to complete it as soon as possible. If they decide to drop it completely or replace it with a gas-fired plant, they face further expense in talks with General Electric Co. and other builders on how to settle the contract.

The decision has been applauded by environment activist groups including ClientEarth, which has been fighting in courts to get the project suspended.

“This is transition risk in action,” said Marcin Stoczkiewicz, ClientEarth’s head of Central and Eastern Europe. “In Poland, coal power has been fiercely defended, but the economics are coming to bear and companies can no longer deny it.”

To contact the reporter on this story: Maciej Martewicz in Warsaw at mmartewicz@bloomberg.net

To contact the editors responsible for this story: Wojciech Moskwa at wmoskwa@bloomberg.net, Andrew Reierson, Reed Landberg