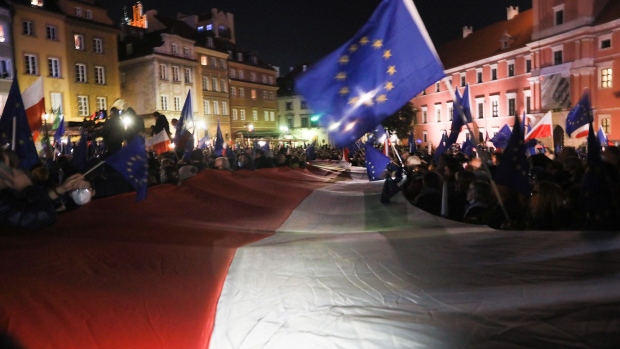 Poland has no intention of leaving the European Union, the country’s de facto leader Jaroslaw Kaczynski has said.

“Anyone sane in politics can’t strive to change” Poland’s status as an EU member, Kaczynski told radio RMF FM in an interview. “Polexit is fake news used by the opposition.”

His clarification comes in the wake of a Polish top-court ruling that challenged the legislative primacy of the bloc and sparked criticism the ruling Law & Justice Party is steering the nation toward an eventual exit.

The judgment sought to assert Poland’s sovereignty, Kaczynski said, adding he supports EU membership himself, as does the majority of the country’s population. That’s a “guarantee” Poland will remain its part, he said.

Tensions between Poland and the EU have reached a new high since the ruling. The Netherlands has called for withholding 36 billion euros ($41.8 billion) in recovery support, while the European Parliament seeks to pressure the European Commission to act against Poland.

The Commission, the EU’s executive body, has already delayed an assessment of Poland’s request for stimulus funds and is still deciding if, and when, to release the money.

Poland will get the money “sooner or later,” Kaczynski said in the interview, asserting it’s being used as a negotiating lever against the nation. “Fear is the worst adviser in politics.”

He also confirmed plans to leave the government to focus on preparing the party for the next general election.