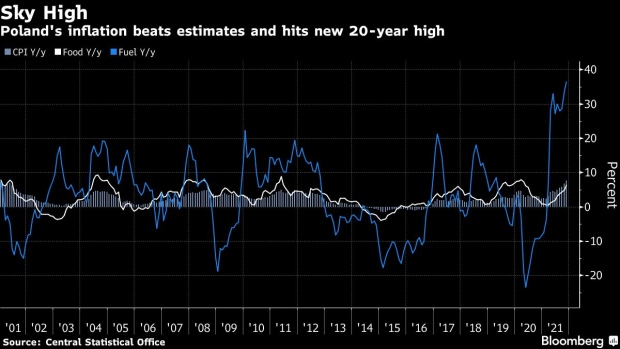 Poland is poised for a hefty increase in interest rates after a spike in inflation to a two-decade high convinced central bankers that spiraling price growth isn’t transitory.

Since the Monetary Policy Council hiked the benchmark to 1.25% last month, all but two of its 10 members have suggested that they’re ready to act again on Wednesday. Of 32 economists surveyed by Bloomberg, 20 expect a 50 basis-point hike to 1.75% and 10 see the rate rising to 2%. The other two expect a 25 basis-point increase.

“Very high inflation means that the Council will be determined to raise interest rates,” said Citigroup economist Cezary Chrapek. The decision will be announced in Warsaw in the late afternoon, and Governor Adam Glapinski will comment on it at 3 p.m. on Thursday.

Comments by the governor sent the zloty to a three-week high against the euro last week by saying inflation is the main concern of the central bank and the government. The cabinet has voiced its support for policy makers to keep a lid on price growth.

Glapinski’s statement underscored the dramatic U-Turn since earlier this fall, when he and other central bankers defended keeping rates on hold until most of the MPC members’ terms end next year. But, long after as regional peers Hungary and the Czech Republic ramped up tightening, the panel shifted its stance in October by hiking the key rate 40 basis points in the first increase since 2012.

For policy makers Rafal Sura and Jerzy Zyzynski bringing the benchmark back to the pre-pandemic level of 1.5% would suffice until the effects of the rate hikes made so far and government plans -- which include stimulus spending and tax cuts aimed at damping inflation -- filter through into the economy.

Other officials, including Eugeniusz Gatnar and Lukasz Hardt, said that bringing the key rate to around 2% may be needed to contain price growth and head off wage demands from spiraling.

Another concern is the persistent pandemic and its potential to undercut economic growth, a main factor in the central bank’s reluctance to tighten policy this year. The government has re-imposed some social-distancing restrictions but forgone a stricter lockdown like that embraced by fellow EU member Austria.

But the European Union’s largest eastern economy is expected to grow about 5% this year, which should provide room for further rate increases, according to Michal Dybula, chief economist at BNP Paribas in Warsaw.

“With such a pace of growth, Poland shouldn’t be afraid of any potential slowing in the aftermath of the fight with inflation,” Dybula said. “Poland shouldn’t get sidetracked from the path -- inflation has to stay in focus.”