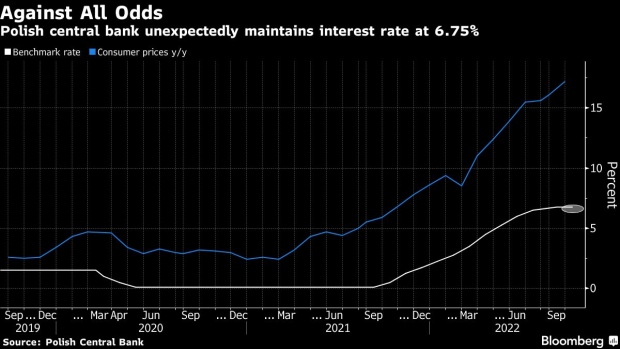 (Bloomberg) -- The Polish central bank unexpectedly paused its yearlong cycle of interest-rate increases after signs of an impending economic slowdown shifted its focus away from surging inflation.

Policy makers left the benchmark rate at 6.75%, defying forecasts from 27 of 30 economists surveyed by Bloomberg. Central bank Governor Adam Glapinski signaled last month that the pause could come as early as October. Yet the latest inflation reading -- the highest in 26 years -- raised expectations for more tightening.

The central bank had lifted rates at each of its previous 11 meetings in an attempt to clamp down on surging prices. The campaign has sparked anger among mortgage borrowers and concerns that the economy may slip into a recession, a risk that Glapinski has repeatedly dismissed as unlikely.

“A further slowdown of GDP growth is forecast for the coming quarters, while the economic outlook is subject to significant uncertainty,” the central bank said in a statement on Wednesday. The economic data so far suggest growth slowed further in the third quarter, it added.

Glapinski will hold a news conference to explain the decision at 3 p.m. on Thursday.

The zloty slumped as much as 0.7% after the announcement. It traded at 4.8290 per euro at 4:10 p.m. in Warsaw. The currency plummeted to an almost seven-month low last week amid a global sell-off, adding to inflation pressures by making imports more expensive.

The central bank repeated in its statement that it’s ready to intervene on the currency market to smooth volatility.

“The Monetary Policy Council is clearly hoping that the slowdown will curb inflation and will give more time for inflation to return to 2.5%” target, ING economists said on Twitter. “It’s a risky strategy.”

Bank Pekao SA economists, who predicted that the rates will stay on hold on Wednesday, said the central bank wasn’t done tightening the policy. A new set of forecasts in November “will show new inflation risks and will be an opportunity for the Monetary Policy Council to revise its strategy,” they said.