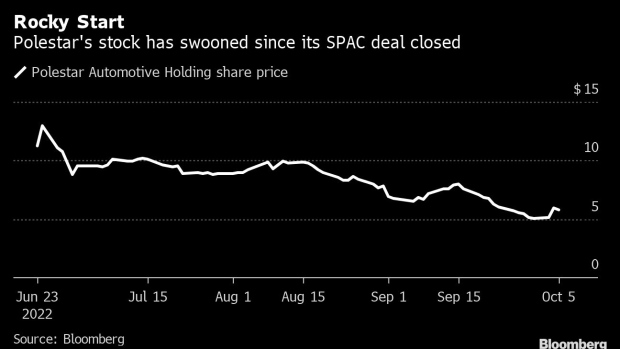 (Bloomberg) -- Polestar Automotive Holding said supply issues that lingered after China’s Covid lockdowns earlier this year will weigh on results the electric-car maker is releasing next month, though it’s sticking with its full-year deliveries target.

The Volvo Car AB plant in Luqiao, China, that produces the Polestar 2 was hamstrung or stopped entirely for almost eight weeks in the spring, and the company is still scrambling to get enough computer chips and other essential parts. Polestar handed over just 9,215 of those sedans to buyers during the quarter ended Sept. 30. The company will need to more than double that figure this quarter to reach its 50,000 vehicle target for the year, as it’s delivered 30,400 thus far.

“We basically have doubled output,” Chief Executive Officer Thomas Ingenlath said in an interview. “The cars are produced, the customers are waiting, the only thing left is that we deliver.”

Polestar’s shares have roughly halved since the company went public in New York in June in the biggest climate-technology SPAC deal during the first half. Appetite to invest in startups has waned since then because of record inflation, rising interest rates and a worsening economic outlook. While drivers seem keen on the Polestar 2, the company may need to tap its main investors Volvo Car and Zhejiang Geely Holding Group Co. for more cash, Bernstein analysts said in June. Polestar is evaluating funding options including both debt and equity, the CEO said.

On the bright side, demand is strong. Every car Polestar will make this year has already been sold, though that’s somewhat common across the industry as customers switch to EVs faster than many auto executives expected. Polestar’s queue also lengthened substantially in April, when Hertz Global Holdings Inc. ordered 65,000 cars for its rental fleet at an undisclosed price. Ingenlath said Polestar, which is targeting around 290,000 EV sales by 2025, is experiencing “robust demand.”

Next week, the manufacturer will unveil the Polestar 3, which will give the manufacturer a presence in the lucrative sport utility segment. It’s the first model Polestar developed from scratch, without drawing significantly on parts and engineering from Volvo Car. Ingenlath said the Polestar 3 will be sportier and swankier than Tesla Inc.’s  Model Y, likening it to the Porsche Cayenne. “I mean that type of aspirational car,” he said.

The Polestar 3 will be made both in China and South Carolina; the 2 is only made in China. While producing the model in the US will help its standing with respect to tax credits included in the recently passed Inflation Reduction Act, the company said it can't confirm whether the vehicle will meet battery material and component sourcing requirements to be eligible for the full $7,500 tax credit.

Polestar, which counted actor Leonardo DiCaprio as an early investor, last month said its operating loss more than doubled in the first half after the cost of expansion and spooling up a retail network washed out gains from its first wave of sedan sales. The company is scheduled to report third-quarter results on Nov. 1.