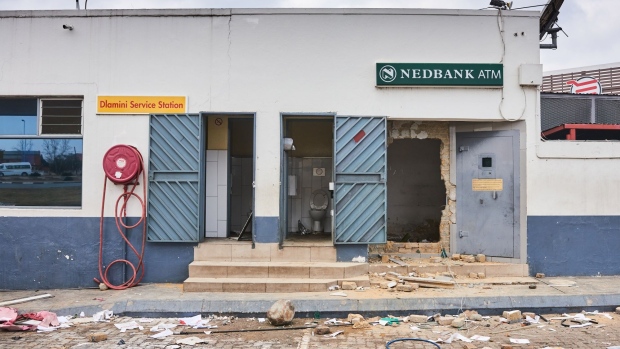 A police officer passes the Jabulani Mall following rioting in the Soweto district of Johannesburg, South Africa, on Thursday, July 15, 2021. Marauding mobs have ransacked hundreds of businesses and destroyed telecommunications towers and other infrastructure, while transport networks and a program to vaccinate people against the coronavirus have been disrupted. , Bloomberg

(Bloomberg) -- South African police arrested 20 suspects in an ongoing investigation into deadly riots and looting that occured in July 2021.

They will appear in the Durban Central Magistrate’s Court on Friday on charges ranging from conspiracy to commit public violence and incitement to commit arson, the Directorate for Priority Crime Investigations said in a statement. More arrests are imminent, the agency known as the Hawks said.

The week of unrest, the worst since the end of apartheid in 1994, left 354 people dead and shuttered thousands of businesses. The violence was triggered by former President Jacob Zuma’s arrest on contempt of court charges and fueled by widespread anger over poverty and curbs implemented by the government to stop the spread of the coronavirus.

The suspects were detained in provinces including the commercial hub of Gauteng, KwaZulu-Natal, North West, Free State, Western Cape and Northern Cape, the Hawks said.