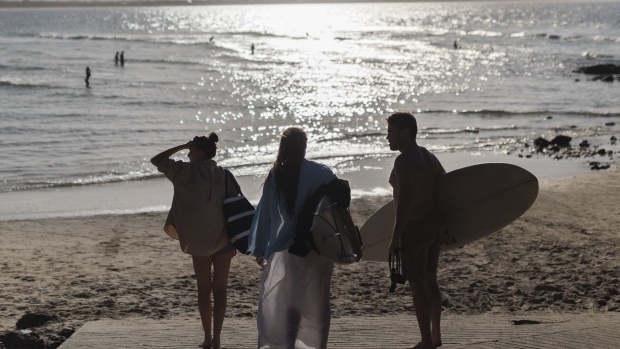 BYRON BAY, AUSTRALIA - MARCH 22: Friends gather at the beach known as The Pass on March 22, 2020 in Byron Bay, Australia. New South Wales Premier Gladys Berejiklian has announced she will be informing the National Cabinet that NSW will proceed to a more comprehensive shutdown of non-essential services to take place over the next 48 hours in a bid to stop the spread of COVID-19. Prime Minister Scott Morrison on Friday introduced further measures to help stop the spread of COVID-19, implementing news rules limiting the number of people inside a venue to one every 4 square metres. Non-essential gatherings of 100 or more people indoors are banned, along with outdoor gatherings of more than 500 people. There are now 1286 confirmed cases of COVID-19 In Australia and the death toll now stands at seven. (Photo by Brook Mitchell/Getty Images) Photographer: Brook Mitchell/Getty Images AsiaPac , Photographer: Brook Mitchell/Getty Images AsiaPac

A backpackers’ hostel in Australia’s popular beach town of Byron Bay has been locked down after a positive Covid-19 case, just days before the area is expecting thousands of school graduates to arrive for year-end celebrations.

Police are stationed outside the Aquarius Backpackers to make sure the 84 staff and guests remain inside for 48 hours, the Australian Broadcasting Corp. reported.

Those locked down in the venue are being supported with food and health care, local MP Tamara Smith said on Facebook.

A woman from Victoria state who was living at the hostel tested positive, the ABC reported.

Byron Shire’s vaccination rate has lagged behind that of the broader state, sparking fears there could be an outbreak in the area as New South Wales reopens following months of travel restrictions. Still, nearly 81% of residents aged 16 and over are now fully inoculated, data shows, compared to 92.1% statewide.