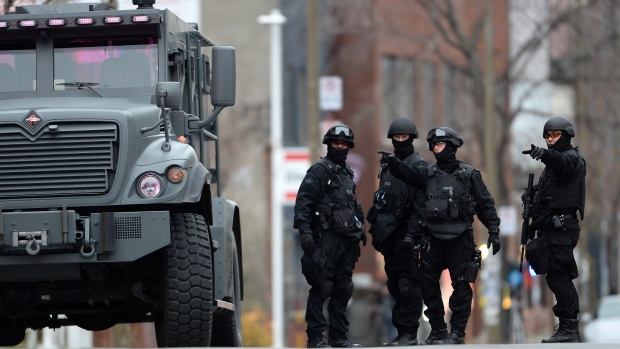 Police tactical team members assemble near an armoured vehicle at the scene of a police operation at the Ubisoft building, in Montreal, Friday, Nov. 13, 2020. , THE CANADIAN PRESS/Ryan Remiorz

Montreal police say no threat has been detected as a major police operation continues in a neighbourhood north of downtown Montreal, near the offices of video-game maker Ubisoft.

The police force said on Twitter just before 4 p.m. that “no threat has been identified for now” and the building is being evacuated.

In an earlier tweet police said the operation was triggered by a 911 call.

They said there were no reports of injuries and specialized officers were inspecting the premises.

Tactical squad officers and an armoured vehicle could be seen around the building on St-Laurent Boulevard in the city's Mile End neighbourhood, and at least three ambulances were standing by.

A large perimeter had been cordoned off by police tape, and police and the mayor were asking people to avoid the area.

Hugo Lefevre, who works at Ubisoft, said he had just returned from lunch when a rumour started spreading through the building that there was a potential hostage situation in the building.

He said at first he thought it might be a prank, but then he was met at the door by police with weapons drawn.

He said he had been in contact with colleagues inside the building who were with police and safe.

A spokesman for Ubisoft said the company was aware of the situation and was working with local authorities. He said all questions about the incident should be directed to police.