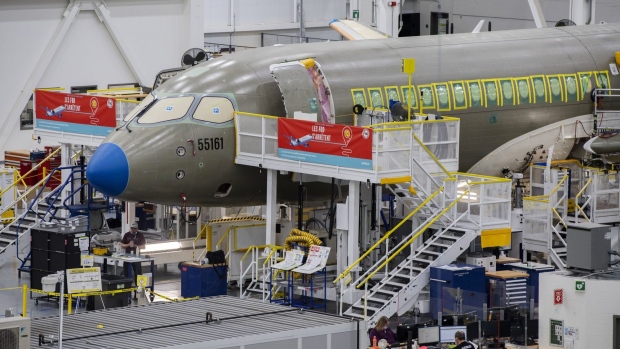 An Airbus A220 at the Airbus Canada LP assembly and finishing site in Mirabel, Quebec, Canada, on Wednesday, Nov. 17, 2021. Air Lease Corp. is seeing demand for single-aisle jets like Airbus SE's A320neo and A220 families outstrip the planemakers' current rates of manufacturing. , Bloomberg

(Bloomberg) -- LOT Polish Airlines SA is close to ordering as many as 60 Airbus SE A220 jets as it looks to swap out its aging Embraer SA planes, according to people familiar with the matter.

The Warsaw-based carrier is in advanced talks with the European planemaker and while the details may change, any deal could be announced as early as next week’s Farnborough International Airshow, the people said, asking not to be identified because the discussions are private.

A purchase order for 60 Airbus A220 jets would be valued at around $2.1 billion, according to figures from leading aircraft appraiser Avitas, although discounts are common in such large purchases.

Outside of smaller Embraer jets, LOT has historically been a committed Boeing Co. customer. Its current fleet is made up of almost 80 aircraft, consisting of Boeing 737-800s, Boeing Max 8s, 787s and regional jets from Embraer and De Havilland Aircraft Co.

The US manufacturer however has had quality issues with its 787 Dreamliner planes and is struggling with a number of other issues. Its 737 Max suffered a lengthy grounding following two fatal crashes and its giant successor to the 777 is years behind schedule.

The A220 is a smaller jet, seating around 100 to 150 people and used mainly for regional short hops.