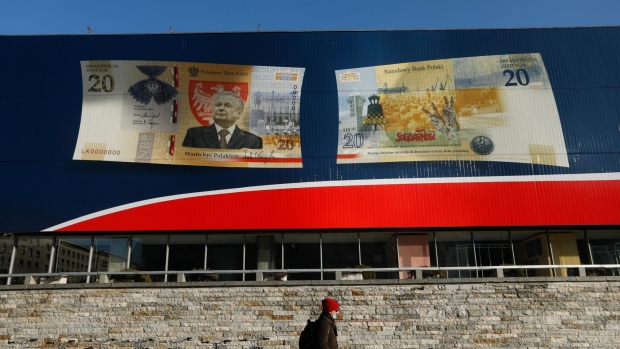 (Bloomberg) -- Polish central bank Governor Adam Glapinski has faced criticism for not doing enough to curb inflation and controversy over U-turns on monetary policy. But in Warsaw nowadays, allegiance with the government goes a long way.

From his spot at the helm of the National Bank of Poland, Glapinski has become a cheerleader for the ruling party’s economic policy, saying the country was witnessing “an economic miracle” and the “best time for Poles in more than two centuries.”

The governor last year honored Lech Kaczynski, the late twin brother of Law & Justice leader Jaroslaw Kaczynski, with a commemorative banknote. He also offered to use the central bank’s profit to help fund Kaczynski’s plan to more than double the size of Poland’s military.

Glapinski, 71, appears on track to stay on as the governor for another six years after his current term expires in June. Popular discontent with rising prices, though, could still undermine him if his political allies seek a scapegoat as the governing coalition wobbles. Indeed, the final decision hasn’t been taken yet, according to an official familiar with the deliberation who spoke on the condition of anonymity.

The governor has now gone beyond paying lip service to Law & Justice, according to Anna Paczesniak, a political scientist at the University of Wroclaw. “Before the inflationary spiral in Poland began to kick in, it seemed that to win the favor of the parliamentary majority and the president, symbolic gestures were enough,” she said.

The independence of the country’s institutions is at the core of a dispute with the European Union that’s turned Poland into a rebel within the bloc along with ally Hungary. Brussels is taking legal action over the government’s treatment of the judiciary and a move to tighten control of the media was only scrapped after a presidential veto last month.

The central bank and the government deny Poland is diverging from the standards required of EU members. The central bank declined to comment when contacted by Bloomberg, saying that it wouldn’t discuss issues related to politics.

Like Prime Minister Mateusz Morawiecki, the governor has argued that fast wage increases have counterbalanced spiraling inflation and blamed the rise in prices on outside actors including the EU — saying its green agenda drives up energy prices — and Russia, which largely controls gas flows to Europe.

For the better part of last year, Glapinski insisted interest rates will stay unchanged for the foreseeable future because the central bank had no control over factors that were driving inflation higher. He dismissed moves by Hungary and the Czech Republic, which began tightening policy over the summer, as exotic.

He pivoted abruptly at the meeting in October, when it was already clear that inflation was accelerating rapidy, reaching levels not seen in two decades. The evening before the decision, Glapinski had said at an event with Polish President Andrzej Duda that borrowing costs would stay unchanged.

The following morning, Morawiecki told a news conference that he expected an “appropriate” response to inflation. Just hours later, Glapinski raised rates and followed the decision by saying that no more hikes were needed. Since then, his Monetary Policy Council has lifted the key rate three more times, to 2.25%.

Glapinski has repeatedly pushed back against any suggestions that his policy decisions may have had anything to do with politics, and that he has been reluctant to raise rates because it could stifle growth and raise unemployment.

“The central bank under my governance is independent like never before, and the MPC is the most independent from all the councils before,” he said a day before the rate hike in October.

Yet economists have criticized Glapinski for reacting too slowly to tackle inflation, which hit a 21-year high of 8.6% in December. The International Monetary Fund said last month that while the first hike may not have come too late, more was needed to prevent the economy from overheating.

President Duda, who nominates the governor and is backed by Law & Justice, has indicated that his support for him remains strong. Glapinski has worked well and “proved himself”  during the first term, he told news website Interia.pl. on Dec. 27.

Kaczynski, Poland’s most powerful politician, said in December that there were “lively disputes” between the government and the central bank over its “inaction” but said he still backed Glapinski. “We are on very good terms,” Kaczynski said. “I had no doubt that he should be the president of the National Bank of Poland.”

But there is a risk that Glapinski’s loyalty may be hitting the wall of economic reality. Rampant inflation has put pressure on the government before next year’s elections. According to a survey by Kantar, Poles are now more worried about higher prices than Covid-19.

The president’s pick will still need the approval of parliament, a big ask if the ruling coalition fails to hold on to its wafer-thin majority or some of the lawmakers break ranks in the vote.

And if voters don’t buy his arguments, it may turn ugly for the governor, said Paczesniak, the political scientist: “Kaczynski will sacrifice his friend to convince Poles he’s ready to do everything to offer them some relief.”