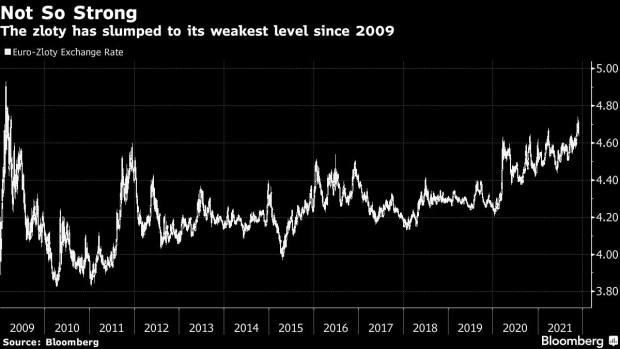 Polish central bank Governor Adam Glapinski cast the authority as a guardian of a strong zloty in his latest attempt to lift the sagging currency that has added to inflation woes.

A strong currency is a reflection of the economy’s strength, he told Gazeta Polska weekly newspaper in an interview published on Wednesday, adding that appreciation is “not always beneficial” because it may reduce competitiveness.

“The strength of the zloty always depends on the economy,” he told the newspaper. “There is no strong economy without a strong zloty.”

The governor has pivoted from previously trying to keep the currency weak to saying that its further decline wouldn’t be consistent with economic fundamentals. The zloty last month slumped to its weakest level since 2009 just as the country is battling the highest inflation in two decades.

The currency gained on Wednesday and was up 0.2% at 4.6512 against the euro at 10:15 a.m. in Warsaw. It has lost almost 2% this year, the most among central and east European currencies tracked by Bloomberg.

“Remarks from Governor Glapinski about strong zloty and strong economy will have to be followed by concrete measures to expect sentiment toward the zloty to improve,” said Piotr Matys, an analyst at InTouch Capital Markets Ltd. “These include yet another proper rate hike in December accompanied by a hawkish message.”

Glapinski has for months refused to follow nearby Hungary and the Czech Republic in raising interest rates before unexpectedly relenting in October and November, as rapidly rising prices became a growing concern. The government last week proposed to cut taxes in utility bills to help the central bank tame inflation.

Glapinski, who is seeking a second term as the central bank governor next year, said there is still room to increase interest rates even though the scope to do so isn’t unlimited.

“We can’t smother the economy due to a possible rise in unemployment,” he said.

Some of Glapinski’s fellow policy setters have signaled that they are ready to back an interest-rate hike next week. The central bank has raised rates by 115 basis points since October. Inflation will likely peak in December, but stay elevated in 2022, according to the governor.

(Updates with the zloty in 5th paragraph, analyst in 6th)