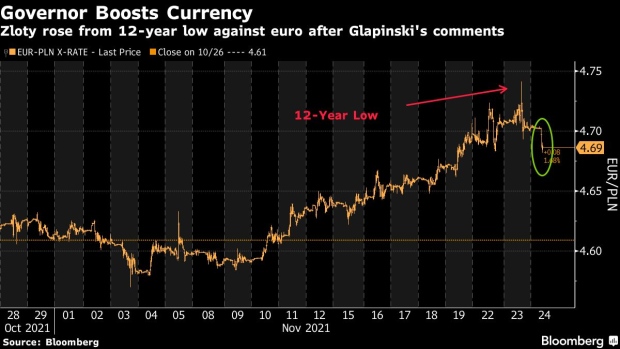 Further declines wouldn’t be consistent with the country’s economic fundamentals, he told Interia website on Wednesday, in a fresh attempt to halt the slide that made the zloty one of the worst emerging-market performers this month. The currency jumped the most in seven weeks following the remarks.

Polish officials are growing increasingly alarmed about the zloty’s weakness, which comes as the country is battling the highest inflation in two decades. Glapinski, who for months refused to tighten monetary policy, said expectations of further interest-rate increases should boost the currency.

“The current weakening of the zloty is influenced by several factors, but the economic situation in Poland is certainly not one of them,” he told Interia. “Therefore, I would like to emphasize that a further depreciation of the zloty exchange rate wouldn’t be consistent with the fundamentals of the Polish economy or with the monetary policy pursued by the National Bank of Poland.”

Fresh data this week showed Poland’s industrial production and retail sales grew more-than-expected in October as unemployment remains low. Yet the rapid surge in Covid-19 cases is raising questions about the sustainability of the recovery, while runaway inflation has become a source of concern for consumers and a hot political issue.

Glapinski and Finance Minister Tadeusz Koscinski will face questions from lawmakers about inflation -- which at 6.8% is nearly twice as high as the upper end of the central bank’s tolerance range -- at a parliamentary committee hearing which starts at 1:30 p.m. in Warsaw.

Glapinski again refused to give any guidance about the timing and scale of future rate increases, saying they’ll depend on the developments in the economy. The governor wrong-footed markets with a rate increase in October, which he later admited was intentional.

The central bank “reserves the right to intervene in the currency market,” Glapinski said. Economists at the local units of Citigroup Inc. and ING Groep NV reckon policy makers should step into the market to boost the zloty, on top of their verbal warnings, if they want to quickly wrestle back control over inflation.