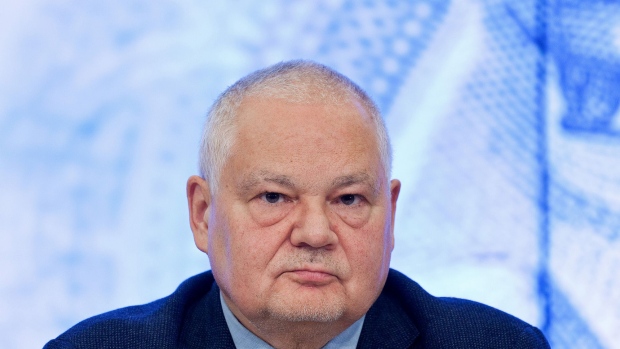 Adam Glapinski, governor of Poland's central bank, also known as Narodowy Bank Polski, pauses during a news conference in Warsaw, Poland, on Wednesday, Nov. 9, 2016. After holding the benchmark at a record low for a 17 month, the central bank said it won’t start tightening policy until late next year if inflation and economic growth pick up as predicted. , Bloomberg

The proposal reflects a positive assessment of the Governor’s actions to limit the negative impact from the pandemic on Poland’s economy, presidential aide Pawel Szrot told PAP newswire.

Glapinski, 71, whose current term expires in June, orchestrated swift interest-rate cuts to near-zero in the spring of 2020. He also started the first-ever bond-buying program by the central bank, which helped to fund state subsidies to companies hit by lockdowns.

In recent months, Glapinski has faced criticism for not doing enough to curb inflation as well as controversy over his U-turn on monetary policy. The central bank started raising rates late last year, an unexpected move in light of his earlier resistance to tightening monetary policy.