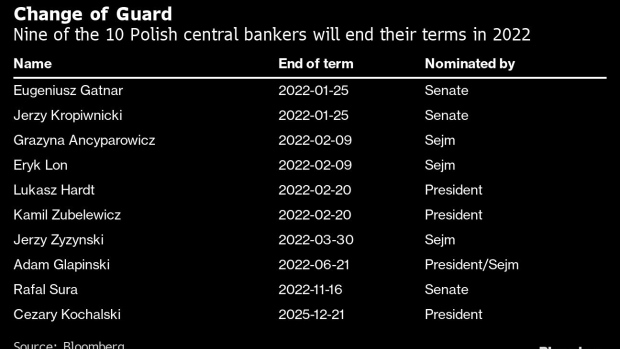 Eugeniusz Gatnar, whose tenure in the 10-member Monetary Policy Council ends on Tuesday, urged his colleagues to lift borrowing costs and said a government tax overhaul could fuel price growth that’s already at its highest in more than two decades.

“I have serious concerns that Poland can manage to avoid double-digit inflation,” Gatnar said in an interview in Warsaw on Monday. “Inflationary impulses have dispersed and are spilling over into the economy.”

The benchmark rate will need to rise slightly above 3%, which would cool consumption and slow the economic growth to about 4% this year, he said.

His dire predictions follow comments last week from Governor Adam Glapinski that interest rates should rise by more than the market predicts. Gatnar has frequently clashed with the governor, who insisted on keeping borrowing costs at a record low for the most of last year despite accelerating inflation.

Joanna Tyrowicz, the opposition’s candidate to join the policy-making board, warned last week the economy could face “a modern version of stagflation” in which rampant inflation is coupled with sluggish economic growth. The benchmark rate now stands at 2.25%

After being appointed in 2018, Gatnar was the first and most vocal MPC member to warn of higher inflation in the face of the central bank’s forecasts -- and called for his colleagues to follow their Czech and Hungarian counterparts in raising interest rates. He also criticized the central bank’s support of a weaker zloty, saying it was a factor driving price growth.

Gatnar said inflation could surge to 9.5% in January and February, from 8.6% in December, the highest level since late 2000. He said a stronger zloty may help mitigate the acceleration.

But the government’s tax overhaul, which was initially aimed to help poorer Poles but has left some workers including teachers and doctors with lower paychecks, may stoke calls for higher wages and fuel inflation further.

“The government’s tax revamp program may actually trigger a wage-price spiral,” he said. “That would contradict the government’s intentions as people were to get additional money from lower taxes instead of calling for higher salaries.”