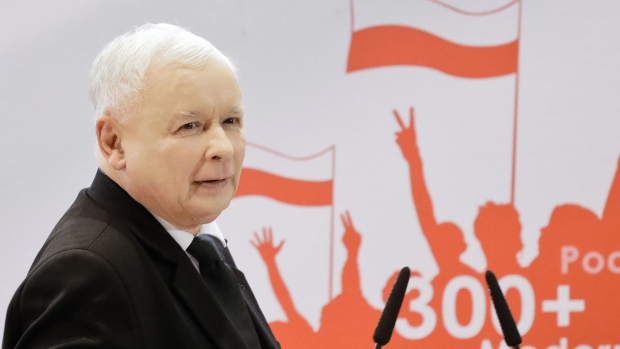 (Bloomberg) -- Poland’s ruling party is growing increasingly doubtful that the European Union will release the country’s share of post-pandemic funds before elections next year, according to an official familiar with leadership’s thinking.

A surge in inflammatory comments against the European Commission from the ruling Law & Justice Party this week -- including a threat to use the country’s veto powers on EU decisions-- is meant to put the pressure on the bloc to free the 35.4 billion-euro ($36.6 billion) earmarked for Poland, according to the person, who asked not to be named because the discussions are private.

The person said that the comments weren’t just rhetoric, and Poland won’t take another step toward meeting demands that it roll back the nationalist government’s overhaul of the courts, which EU officials say undermines judicial independence. The commission has made that a key condition for the release of the funds and Poland’s reluctance to comply has been the source of a long-running rule-of-law dispute between Warsaw and Brussels.

Warsaw has taken a leading roll in hosting hundreds of thousands of Ukrainian refugees since the Feb. 24 invasion and some in the government had believed that may mitigate EU demands in other areas such as the rule of law. Now the ruling party needs the money as it battles a cost-of-living crisis fueled by the war in neighboring Ukraine and struggles to revive support before next year’s ballot.

Law & Justice leader Jaroslaw Kaczynski, Poland’s most powerful politician, vowed on Monday that his government won’t take any further steps to meet the EU’s demands. He also accused commission President Ursula von der Leyen of failing to adhere to an earlier agreement, under which the country would start receiving the money.

The government insists that a law introduced in June to overhaul a contested regime for disciplining judges already meets the criteria set out in a spending plan that the EU approved earlier this year. Von der Leyen said last month Poland hadn’t done enough.

Anticipation that Warsaw and the commission would find a compromise have helped stem losses in the zloty since April. But this week’s outbursts from Kaczynski and his allies have boosted skepticism among investors.

Kaczynski has accused the commission of working alongside his party’s opposition rivals to undermine the government before the election, which is slated for next autumn.

Separately, Law & Justice Secretary General Krzysztof Sobolewski said on Monday that Poland will “pull out all the cannons” and “open fire” if the commission tries to push the government “against the wall.”

But the government’s leverage is limited. Poland has run up more than 250 million euros in penalties for failing to comply with an order from the EU’s top court to scrap the disciplinary regime, and the fine continues to grow by 1 million euros a day.

Commission spokeswoman Arianna Podesta said on Thursday that there’s “no space for misunderstandings” when it comes to the conditions for the disbursement of funds. The commission will have two months to assess if they’ve been met once it receives a payment request, she said.

Poland plans to file a request in October or November, according to Prime Minister Mateusz Morawiecki.

(Updates with zloty in ninth paragraph.)