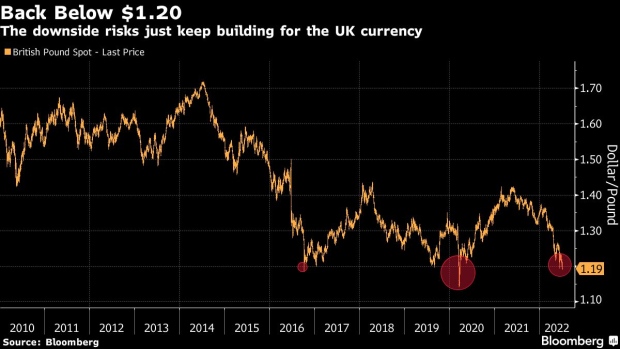 The pound’s double-digit slump against the dollar this year may not be over yet amid pressure on the currency from a mix of domestic and global concerns.

While sterling has barely budged on the resignations of two of Prime Minister Boris Johnson’s key ministers -- in contrast to years of politically-fueled market turbulence during Brexit negotiations -- the latest political turmoil adds to the already uncertain UK outlook. Sterling, down almost 12% this year, was little changed at $1.1944 as of 11:20 a.m. London time.

Global risk sentiment, recession worries and Bank of England policy remain key drivers for the currency, and have already pulled it down to the lowest since March 2020. Domestically, one key focus now is the future of fiscal policy and the possibility of tax cuts under new Chancellor of the Exchequer Nadhim Zahawi, who was appointed late Tuesday after his predecessor, Rishi Sunak, unexpectedly quit. But even a support package to help consumers through the country’s cost-of-living crisis might only have a limited upside pound impact.

“Will they do anything to cut taxes? I don’t think that is still enough to solve the problem of sterling,” said Jordan Rochester, a strategist at Nomura International Plc. “We might see some efforts to lower fuel taxes, VAT, corporation taxes. But the bigger problem is a global one. We’re in a natural gas crisis.”

Rochester has a target of $1.18 on sterling, and thinks “the risk is we go lower.”

Options traders are also positioned for further losses for sterling. Only during tail-risk episodes, such as the Brexit referendum and the market turmoil in March 2020, has demand for low-probability bearish pound options been greater in the past decade. The spread between so-called 25-delta and 10-delta cable puts shows that investors are willing to pay a relatively high price to hedge against a large drop in the pound.

While the BOE is raising interest rates to try to tame rampant price growth that’s taken hold, its steps have so far been more timid than those of the Federal Reserve, another reason the pound is losing ground to the dollar. That could change however, with BOE Chief Economist Huw Pill saying Wednesday that he’s prepared to tighten at a faster pace if needed.

“The UK economy faces one of the worst trade-offs between growth and inflation across developed markets,” said Hugh Gimber, at J.P. Morgan Asset Management. “This puts the Bank of England in a real bind. It means you can’t guarantee that rate hikes will be trusted as a positive for the pound, and the political uncertainty over the past 24 hours only exacerbates that downside risk.”

But there’s no ignoring the global factors, particularly the impact of energy supplies if Russia cuts off gas to Europe. Germany’s top power grid regulator has warned that there’s a question over whether planned summer maintenance on the Nord Stream 1 gas pipeline “will turn into a longer-lasting political maintenance.”

Here’s a roundup of what strategists are saying:

“The first comments from the new Chancellor of the Exchequer Zahawi stress the importance of providing further fiscal stimulus from here and the fact that the measures could go well beyond and above what the previous Chancellor has envisaged,” he said. “To the extent that this further allows the BOE to frontload some of the hikes they have in store for us, this could help the pound consolidate.”

Gabriele Foa, co-portfolio manager at Algebris Investments, said in a note that key resignations will lead to more pound volatility:

“After last month’s confidence vote, Johnson’s position is clearly more unstable and increased uncertainty around the next government will weigh on the currency. Beyond the initial impact, markets may see a change in government as a positive catalyst for GBP. Brexit uncertainty, oscillating economic policies and more politicized Bank of England communication have been important factors behind sterling’s weakness over the last 12 months. Improvement in any of these areas could provide relief for the currency and UK assets in general.”

Deutsche Bank analysts led by Jim Reid note it is difficult to trade any potential policy chances given how fraught Johnson’s position is:

“If the PM can stay on he will likely pivot towards easier fiscal policy now the Chancellor has resigned. However it’s tough to price that in as it’s not clear whether the PM can survive this episode.”

“The impact on sterling from Prime Minister Johnson’s political troubles in recent months has been relatively limited. But the resignations of two key ministers yesterday have sharply increased the probability that he will leave office this year according to UK bookmakers. This potentially adds a negative political factor to the existing negative policy and macro factors that have been weighing on sterling.”

“Boris is a side-show versus the underlying drivers of the volatility we’re seeing at the moment, inflation and recession fears,” he said. “Credit is much more at the mercy of the Bank of England, who in turn are at the mercy of inflation prints and whether Russia cuts the pipeline.”

“The new Chancellor is not going to be in a position to substantially alter the course of the UK economy. This probably explains why sterling and other UK assets have barely moved on the news of these resignations and appointments. The best he can hope for is to help steady the ship, until the global economic storm has passed. Some targeted fiscal measures seem more likely than an attempt at introducing a transformative new policy regime.”

“On the face of it, fiscal policy looks likely to be looser should Boris survive than it would be under his most-touted successors in the event of a change of leadership; all things being equal that suggests the gilt market may respond more positively to the latter scenario.”

James Athey, investment director at abrdn, says as a general rule markets don’t like political uncertainty but it’s difficult to see an obvious market move in response to the crumbling of the Cabinet:

“Right now uncertainty is a currency we are dealing with in spades. When economic uncertainty is as elevated as this there doesn’t seem to be much additional risk premium required to account for what is really an extension of a fairly long running trend now -- the steady collapse of Boris Johnson’s political capital...within the Tory party the lack of viable leadership alternatives has, I am sure, kept many of the knives in their sheathes. Therefore Boris can probably continue to limp on and markets can continue to focus on growth and inflation.”