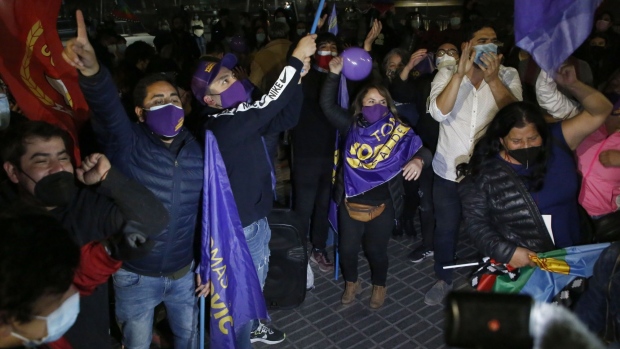 (Bloomberg) -- Chilean copper mining is facing its biggest regulatory threat since the industry took off more than three decades ago.

Triggered by the worst social unrest in a generation, Chile just elected an assembly that places the writing of a new constitution largely in the hands of the left wing, with the ruling coalition falling well short of the numbers needed to exercise veto powers. After the weekend vote, the nation’s stocks, bonds and currency tumbled, while copper futures rose.

The makeup of the constitutional assembly leaves miners like BHP Group and Anglo American Plc vulnerable to tougher rules surrounding water, glaciers, mineral and community rights. The government’s crushing defeat may also add momentum to a bill that would create one of the heaviest tax burdens in global copper mining.

“Looking at how the distribution of the assembly came out, it’s clear there will be a search for mechanisms to redistribute more mining profits to society, and there will be more environmental requirements regarding an industry that people sometimes think -- often in a simplistic way -- is very profitable and polluting,” said Alejandra Fernandez, metals and mining director at Fitch Ratings Inc.

The new constitution may include language that tightens guidelines for mining concessions and their environmental impacts, Fernandez said. Talks probably will center around water becoming a national good for public use, which points to revised property rights and increased penalties for misuse, she said. Every year, the mining industry uses enough water to supply 75% of the country’s need, according to McKinsey & Co.

Still, miners have already started working on their carbon footprints and community engagement. Government agency Cochilco projects the industry will meet more of its water requirements through desalination in coming years, and companies are switching to renewable power and starting to turn to green hydrogen as a way of replacing diesel.

The potential legislative and regulatory changes come amid a metals rally that has spurred record earnings. For proponents of a bill to tax copper sales at rates as high as 75% when prices surpass $4 a pound, companies should be handing over more of the metal windfall to rectify Chile’s lingering economic and social imbalances.

While bumper profits would take the edge off tighter regulations for producers, sky-high metal prices also help explain the increase in resource nationalism, especially coming at a time when the pandemic is exacerbating inequalities in developing nations.

Despite social and political tensions, the potential for negotiation remains, according to Verisk Maplecroft analyst Mariano Machado. Different factions may seek modifications to the mining royalty bill in exchange for changing water rights, for example.

The headwinds facing Chilean mines are also part of the bullish story for copper. The metal has doubled in value in the past year partly because of concerns that supply won’t be able to meet growing demand for the raw materials needed in the clean-energy transformation.

Massive porphyry deposits and huge inflows of foreign investment since the country’s return to democracy have made Chile the world’s dominant supplier.

But Chile’s ore quality has fallen steadily in recent years. That means more volume has to be mined, and more money invested, to produce the same amount of metal. State-owned Codelco, formed by nationalized U.S. mines in the 1970s, is spending tens of billions of dollars just to prevent its output from falling.

To be sure, the constitutional process will last a year and foreign mining companies have stability agreements that protect them from tax changes through at least 2023. But while the debate lasts, they may be reluctant to pull the trigger on big new projects.