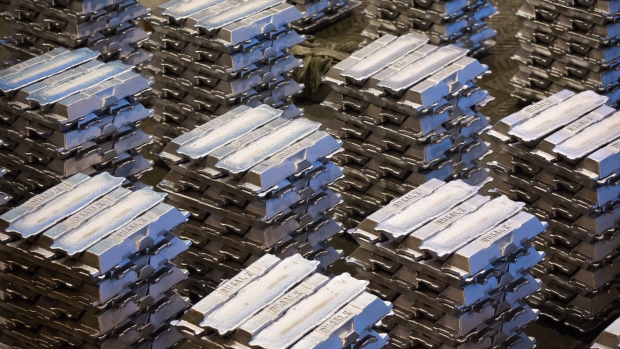 Aluminum ingots sit in a warehouse storage facility at the Krasnoyarsk aluminum smelter, operated by United Co. Rusal, in Krasnoyarsk, Russia, on Monday, Sept. 3, 2018. The season for aluminum producers and buyers to hash out U.S. sales contracts has started much earlier than usual this year thanks largely to uncertainties over sanctions on United Co. Rusal. , Bloomberg

WASHINGTON - The United States is once again threatening to spark a fresh tariff war with Canada over aluminum exports, despite the debut of a North American trade agreement that was supposed to usher in stability in the midst of an international economic crisis.

Precisely why remains a mystery to trade and industry insiders, although it's likely the result of a convergence of disparate factors: COVID-19, international metals arbitrage, President Donald Trump's re-election campaign and $16.3-billion worth of Russian aluminum.

“It doesn't make sense,” said Jean Simard, president and CEO of the Aluminum Association of Canada, coming as it does with the coming into force of USMCA - the U.S.-Mexico-Canada Agreement, which formally replaced NAFTA this week.

“It's like an oxymoron. It's so contradictory to the spirit of USMCA.”

“Looking over the past decade, we've seen aluminum consumption by the auto sector grow pretty strongly due to all the lightweighting initiatives. And this should just keep things moving in the right direction.”

The U.S. doesn't have anywhere near enough smelting capacity to meet that demand by itself, he added.

Understanding how aluminum production works around the world, and how traders and marketers make money from it, can shed some light on how the U.S. is threatening Canadian aluminum anyway.

Because they traffic in white-hot liquid metal, aluminum smelters can't simply shut down when demand for the product dries up, which is what happened to Canadian producers - who provide the bulk of the metal to U.S. markets - when the pandemic forced auto manufacturers to idle their assembly lines.

Instead, they were forced to pivot away from the specialized premium products demanded by the auto sector and produce the more generic primary aluminum known as P1020, shipping it to the only storage warehouses that are cost-effective, Simard said: facilities in the U.S., which is where the lion's share of the North American aluminum market is located.

The ensuing “surge” in Canadian imports caught the attention of the U.S. trade representative's office - or more specifically, the two U.S. producers that raised a red flag: Century Aluminum and Magnitude 7 Metals, which together comprise a Trump-friendly lobbying effort known as the American Primary Aluminum Association.

“The surge of Canadian metal has a caused the price to collapse and is endangering the future viability of the U.S. primary industry,” the association wrote to U.S. trade ambassador Robert Lighthizer in May.

“Action - real action, not mere monitoring, and endless discussions in multinational fora - is needed now if the United States is to save what is left of its primary aluminum industry.”

A spokesman for the APAA did not immediately respond to media queries Friday.

A separate group known as the Aluminum Association, which counts dozens of U.S. and international producers among its members, has argued against tariffs, calling Canadian suppliers an integral element of the North American supply chain and a key component of the industry's success.

Glencore Plc, a metals trader and producer based in Switzerland, holds a 47 per cent stake in Century. Magnitude 7, founded by a former Glencore aluminum trader, operates a single plant in Missouri that won a new lease on life after Trump's first round of tariffs in 2018, but which warned in February it was on the verge of shutting down.

Glencore also holds the exclusive rights to sell Russian-made aluminum in the U.S., and agreed in April to spend $16.3 billion over the next five years on up to 6.9 million tonnes of the metal from Rusal, the second largest aluminum producer in the world.

Glencore is also a major player in the world of metals arbitrage - buying commodities at the lowest price possible, then shipping and storing them before selling on a futures contract in hopes of a higher price. The pandemic has fuelled a global collapse in the price of aluminum, Simard said, while the threat of tariffs has had the opposite effect.

“What do the traders do? They buy the metal at a very low price because the crisis is what brought you to pivot to this position, and they warehouse it when interest rates are very low because it's a crisis,” Simard said.

“The key player over and above everybody else is Glencore.”

Rusal, once controlled by the Russian billionaire oligarch Oleg Deripaska, was subject to U.S. sanctions since Moscow's annexation of Crimea in 2014 - sanctions that were lifted in January 2019 as part of an extensive restructuring that saw Deripaska relinquish control of the company. Glencore was involved, too, swapping shares in Rusal for a direct stake in its parent company, En+.

The USTR and the Trump administration “cannot be unaware of the corporate structure around Rusal and Glencore. I would doubt it very much,” said Simard, who suspects the White House is picking a fight it believes will be politically helpful as the president returns to the campaign trail later this year.

The Canadian aluminum industry, the bulk of which is located in Quebec, owes its origins to soaring American demand for the metal in the months prior to the U.S. entry into the Second World War - a partnership that cemented Canada's role in the continental military industrial base.

Is the Trump administration trying to end that relationship?

“It's worth raising the question,” Simard said.