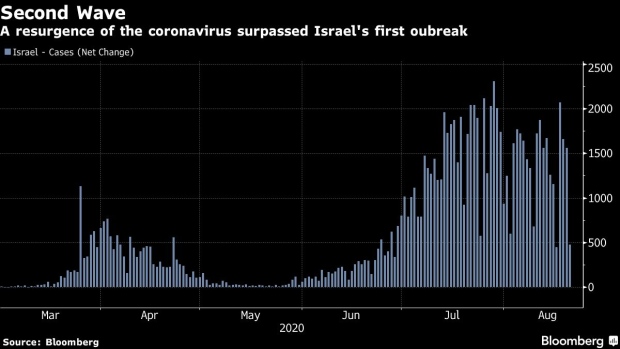 The Central Bank of Israel stands in Jerusalem, Israel, on Thursday, Jan. 9, 2020. The Bank of Israel prolonged its interest-rate pause to over a year after almost doubling the pace of foreign-currency purchases and pinning much of the blame for weak inflation on gains in the shekel. Photographer: Kobi Wolf/Bloomberg , Bloomberg

(Bloomberg) -- Israel’s central bank is making a stand against further appreciation of the shekel and remains unlikely to push interest rates to zero or below after the newly formed cabinet appeared to stave off collapse.

A political wrangle was in focus in the days before the decision, with Governor Amir Yaron warning that new elections would hurt the economy. The Bank of Israel will hold its benchmark rate at 0.1% on Monday, according to all 13 analysts surveyed by Bloomberg.

Uncertainty over political and fiscal issues means the central bank’s currency interventions could take precedence over its other tools, especially since it has little policy room to maneuver, according to Rafi Gozlan, chief economist for Israel Brokerage and Investments Ltd.

“If they do something, it’ll be to be more aggressive in the foreign exchange market,” he said. “That’s where, in my opinion, there’s space.”

Prime Minister Benjamin Netanyahu said late on Sunday that he’d accepted a proposed compromise that would end a coalition crisis that threatened to bring down the government. Until the announcement, Netanyahu and his main coalition partner were unable to agree on the country’s next fiscal plan or a deadline extension.

Under Israeli law, parliament would have been automatically dissolved if a spending plan wasn’t passed by a stipulated deadline on Monday.

Since the central bank’s last rate decision in July, when policy makers announced plans to purchase corporate bonds for the first time ever amid a second wave of coronavirus cases, second-quarter data showed a record output contraction, though the economy fared better than some estimates.

In the latest forecasts presented to the government, the Bank of Israel sees negative growth this year of 4.5% or 7%, depending on the course of the pandemic.

Policy makers are also having to contend with a strengthening currency that poses a risk for exporters and inflation.

The Bank of Israel has spent billions of dollars intervening in foreign exchange markets this year to weaken the shekel and boost inflation toward its target range of 1% to 3% target. Consumer prices have been falling on an annual basis for the past four months.