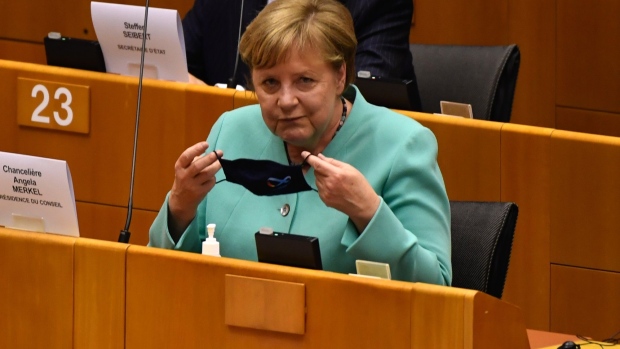 The vast majority of Germans support Chancellor Angela Merkel’s efforts to combat the coronavirus, a public opinion survey showed days after demonstrators stormed the steps of the Reichstag to protest containment policies.

The government’s approach is considered adequate or even too lenient by 84% of those people surveyed in a Forsa poll published on Tuesday. Only 15% said that social distancing and other measures go too far.

An estimated 38,000 people took part in a rally in central Berlin on Saturday to protest against virus restrictions, and police struggled to maintain order. Many ignored hygiene and distancing rules and some became violent. A group of right-wing protesters managed to breach a security barrier and mount the front steps of the historic Reichstag, which houses the lower house of parliament.

“After last weekend’s protests, some of the media created this horror vision of a divided society,” Manfred Guellner, head of Forsa, said in a phone interview. “But the vast majority of Germans support the government’s tough line on the coronavirus. The people who are against it are a small minority.”

The majority of Merkel’s critics are supporters of the right-wing Alternative For Germany, or AfD, of which 49% believe that the anti-virus measures are too strict, the poll showed. Among backers of Merkel’s CDU-led conservative bloc, 92% support the chancellor’s policy.

Merkel’s chief spokesman, Steffen Seibert, on Monday condemned the protests as “shameful”. German President Frank-Walter Steinmeier called the incident an “intolerable attack on the heart of our democracy.”