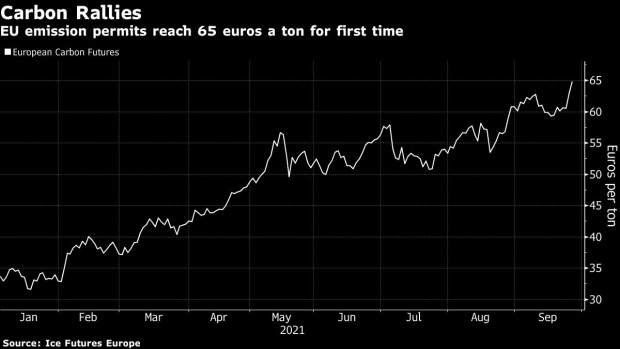 Vapor rises from the cooling towers of the Turow coal powered power plant, operated by PGE SA, in Bogatynia, Poland, on Sunday, Aug. 15, 2021. European companies chasing zero-emission targets are starting to turn to countries such as Poland to bolster their clean-power supplies. Photographer: Bartek Sadowski/Bloomberg , Bloomberg

The cost of polluting in Europe surged to a fresh record as a shortage of natural gas prompts electricity producers to burn coal.

Carbon permits exceeded 65 euros ($76) a metric ton on Monday. Prices are rising as European utilities are being forced to burn more coal, with several power producers stepping in to the physical market on Friday to secure cargoes of the dirtiest of fossil fuels ahead of the winter.

Europe has the world’s most ambitious climate plan, but political will is being tested by soaring energy prices. As countries take steps to ease the blow of higher gas and electricity prices on consumers, Spain warned the European Union that measures to reduce emissions “may not stand a sustained period of abusive electricity prices,” according to a Sept. 20 letter.

“A tight gas market should continue to pull EUA prices higher,” Citigroup analysts led by Edward Morse said in a report, referring to European carbon allowances. “Furthermore, coal use in Europe is expect to increase through winter, on lower renewables power generation and planned closures of some nuclear power generation capacity.”

Carbon futures jumped as much as 3.4% to 65.06 euros a ton. Prices almost doubled this year as speculators piled in and fossil fuel prices surged. The rising cost of polluting also boosted the cost of producing electricity, sending German power prices for next year, a European benchmark, up almost 6.7% to a record 114.70 euros a megawatt-hour on Monday.

European utilities are snapping up coal cargoes just before the start of the heating season. A shipment for delivery next month at a major European hub traded at $200 a metric ton on Friday, the highest since 2008, according to traders who saw the transaction on the globalCOAL platform. Coal futures for next year delivery gained as much as 6.5% to $147 a ton Monday, the highest in 13 years.

The gas shortage is also spurring a switch to oil products where possible. An oil-fired reserve power plant in the south of Sweden is seeing its busiest month in more than a decade as the European energy crunch stretches to Scandinavia. While gas-to-oil switching is limited in Europe, there are already signs it’s happening at a greater degree in Asia.

“The scarcity premium in natural gas is fundamentally justified by a low inventory cushion and the need to destroy demand, but creates knock-on impacts not just for thermal coal and CO2 prices but also for petroleum products,” Goldman Sachs Group Inc. analysts led by Sabine Schels said in a report.

OPEC had already warned it expects global oil markets could be tightened by the shortfall in natural gas, as companies are forced to switch to petroleum for power generation. Goldman continues to expect strong returns from the energy complex, with Brent crude now expected to hit $90 a barrel, the bank said.

European gas futures traded in the Netherlands surged 10% to 77.24 euros a megawatt-hour, while the next-month contract in the U.K. gained as much as 9% to 191.74 pence a therm. Prices gained even as wind-power output in Britain was at its highest level since May.