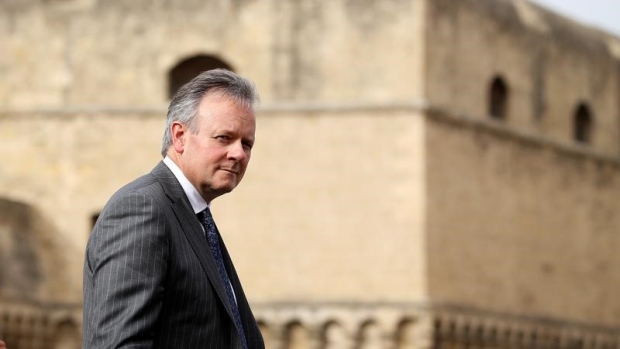 Governor of the Bank of Canada Stephen S. Poloz leaves the G7 for Financial ministers meeting in the southern Italian city of Bari

OTTAWA -- With the Bank of Canada nearing its next policy decision, expectations of an interest-rate hike spread Wednesday after governor Stephen Poloz reiterated that his 2015 cuts appeared to have done their job.

Poloz made the comments in an interview broadcast on business news channel CNBC. He also noted the Canadian economy enjoyed "surprisingly" strong growth in the first three months of 2017 and he expected the pace to stay above potential.

The Canadian dollar climbed to a four-month high of 76.44 cents US after Poloz's comments, which fed speculation about a rate increase as early as its next scheduled announcement in two weeks. The boost lifted the loonie from an average price of 75.83 cents US on Tuesday.

If the central bank increases its key rate, the big Canadian banks will raise their prime rates, driving up the cost of variable rate mortgages, other loans and lines of credit tied to the benchmark rate.

Poloz credited the two rate cuts introduced by the bank in 2015 for helping the economy counteract the effects of the oil-price slump, which began in late 2014. The reductions also helped increase the speed of the adjustment, Poloz added.

"It does look as though those cuts have done their job," said Poloz, who was in Portugal on Wednesday to participate in a forum hosted by the European Central Bank.

"But we're just approaching a new interest rate decision so I don't want to prejudge. But certainly we need to be at least considering that whole situation now that the capacity, excess capacity, is being used up steadily."

The shift toward more "hawkish" statements in recent weeks by Poloz and the bank's senior deputy governor, Carolyn Wilkins, have suggested the bank is moving closer to its first rate increase in nearly seven years. Poloz stated earlier this month that his 2015 rate cuts had done their jobs.

Still, a softer-than-expected inflation report last Friday led some analysts to believe the bank might wait until the fall or later before introducing a rate increase.

But economists interpreted Poloz's remarks Wednesday as a signal the bank has not backed away since the inflation numbers came out and that it may be preparing to raise the benchmark as early as its July 12 announcement.

"I think they've made it clear that they're ready to move," BMO's Benjamin Reitzes, who added that before Poloz's latest comments his bank was predicting an autumn rate hike.

"We're now calling for a rate increase in July."

Reitzes also said Poloz's comments indicate the governor is "comfortable" with oil in its current range of US$40 to US$50 per barrel.

Desjardins senior economist Jimmy Jean wrote: "This does not sound like a central banker who was profoundly shaken by the weaker-than-expected (consumer price index) numbers of last Friday."

The bank lowered its rate twice in 2015 to the very low level of 0.5 per cent to help offset the effects of the oil-price shock.

Poloz said the drop in oil prices set Canada's economy back -- causing the central bank to compensate by lowering interest rates -- but that growth has rebounded with an "encouraging" pace in recent months.

While he said he expects growth to moderate to a more normal level, he predicted it would remain "above potential."

Poloz, who participated in a panel with Bank of England governor Mark Carney, European Central Bank president Mario Draghi and Bank of Japan governor Haruhiko Kuroda, also said virtually every major area of the world seems to be gaining economic momentum -- with the United States "way out in front."