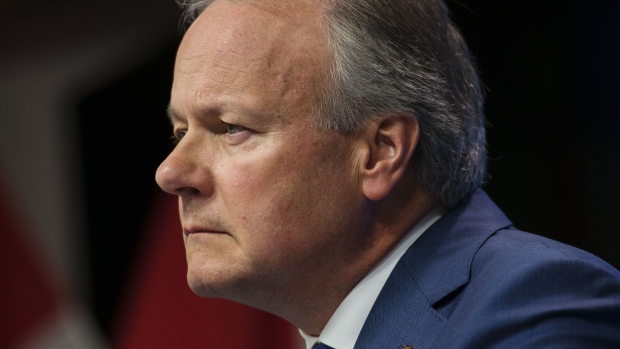 Stephen Poloz, governor of the Bank of Canada, listens during a press conference in Ottawa, Ontario, Canada, on Wednesday, July 11, 2018. , James Park/Bloomberg

In a speech Thursday in Moncton, New Brunswick, Poloz reiterated that the central bank’s assessment of the outlook is uncertain and it’s best not to operate monetary policy “mechanically.” At the same time, the central banker said rates do need to rise because the economy is doing well and inflationary pressures are on target.

The comments were seen as consistent with existing market expectations for another rate increase at the Bank of Canada’s October rate decision, followed by two hikes over the next year.

“While the Governor used the opportunity to remind markets that they will take a gradual approach, an October rate hike still looks very likely following this speech,” Andrew Kelvin, senior Canada rates strategist at TD Securities, said in a note to investors.

The Bank of Canada has raised interest rates four times since mid-2017 to ensure inflation remains in check in an economy that is running out of slack, though questions remain about how high rates will eventually go. The central bank estimates a more normal benchmark rate in an economy that doesn’t need any more stimulus should be at least 2.5 per cent, a full percentage point above the current rate.

Poloz said the central bank’s models are showing the economy is operating “essentially right around capacity,” an assessment that is backed up by recent behavior of consumer prices. He also provided assurances that policy makers won’t drop the ball on inflation.

“Being uncertain about the future does not justify inaction,” Poloz said. “It does not mean keeping interest rates on hold until inflation momentum begins to build.”

At the same time, he reiterated a belief that the best approach to policy is one of risk management -- assessing both upside and downside risks -- that has made policy makers “decidedly data dependent,” and dismissed chances the central bank is prepared to drop its gradualist approach despite considering the possibility at its rate decision earlier this month.

“Our confidence is growing, but we remain wed to the gradualist idea because the fact is there are still many things we don’t know,” Poloz said at a press conference after the speech, which was titled Technological Disruption and Opportunity.

The adoption of digital technology is adding to the long list of things that are making it difficult to assess the true state of the economy, Poloz said in the speech.

New technologies may be making it more difficult to measure investment activity, while price-suppressing effects of e-commerce cloud interpretations of inflation dynamics. The net effect may be the economy may have more scope to grow without fueling inflation, than is currently believed.

“The point is that the emergence of new technologies is another source of uncertainty at a time when the Bank is trying to get a handle on many others,” Poloz said.

While acknowledging uncertainty doesn’t justify inaction, Poloz said: “What it does mean is that we will move rates toward a more neutral level gradually, continuously updating our judgement on these key issues in real time.”

Among other uncertainties that policy makers are grappling with are the impact of tougher mortgage qualification rules, the sensitivity of the economy to higher interest rates and the impact of growing global trade tensions.

Poloz downplayed a recent pick up of inflation, saying the acceleration is fully explained by temporary factors. He said the Bank of Canada’s core measures of inflation -- which ticked up to 2.1 percent in August -- has “been trending close to 2 percent, which is what you would expect from an economy operating at capacity.”